Both Ice creams are from Jo Pratt’s In the Mood for Food (Naughty chapter). 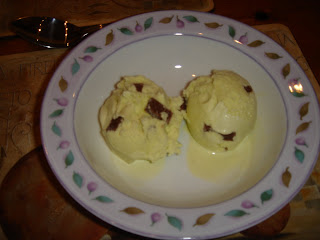 Mint Choc Chip Ice Cream
Mint choc chip is a favourite of mine, one that I have very fond memories of from childhood. In fact anything minty I liked, but back to the ice cream. This is the first recipe I have made for this ice cream. The first time I used the suggested dark chocolate for the choc chips, but it was just a bit too bitter for us so I swapped it out for milk chocolate this time. Also I didn’t colour it green the first time, and it just didn’t taste right not being green! It’s a lovely ice cream, one I’ll cook again.
It’s a basic creamy custard and instead of vanilla pod or extract you use (1 ½ teaspoons) peppermint extract and fold in chocolate chips once churned. 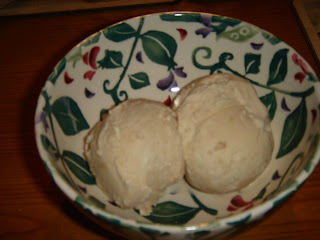 Banana and Muscovado Ice Cream
This one was like banana and light toffee in flavour, a basic ice cream custard base is made with light or dark muscovado sugar instead of caster. I used the light sugar, and the custard tasted really lovely. Three mashed bananas and a little lemon juice were added before churning. Jo suggests adding a couple of tablespoons of banana liqueur as well, but as I like to make ice creams that my little one can eat as well the booze was out. Would be nice for an adult version though.
I remember that about 12 years ago I did buy a bottle of Crème de Banan (well it was called something like that) and added it to a pudding with great success, I just can’t remember what that pudding was now. Maybe something from the original Masterchef with Lloyd Grossman.
Anyhow the flavour of the ice cream is delicious. I’m going to try freezing just the base made with the muscovado sugar as well, I think it would be really good as a different take on vanilla.
Posted by Kelly-Jane at 00:21

Labels: In the Mood For Food

They both look yummy! I like making ice cream but haven't for ages. Did you have them on separate occasions?

Ummm, this makes me feel like making ice cream again. Just have to find space in the freezer for the machine, lol.

Both look delicious but I am really attracted to that banana one.

Kathryn, I made them together but felt that they didn't go together, so served them seperately.

Pistachio, They take up a lot of space don't they LOL!