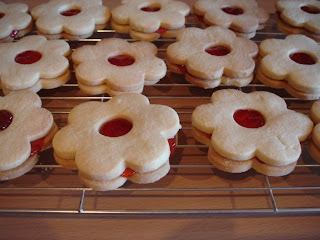 Jammy Splodgers
There have been so many good new cookbooks coming out lately, I’m trying hard to work my way through my to-read pile. Don’t get me wrong, I love cookbooks (no surprise there then…), but of late my pile is so high and I just can’t seem to get to the bottom of it. Please tell me it’s not just me! 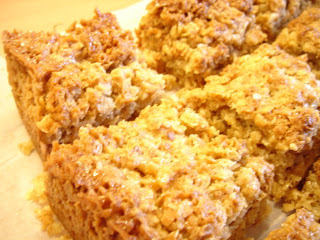 Mildon Flapjacks
Anyhow a few weeks ago after some internet bookshop surfing I came across and bought Cookie Magic by Kate Shirazi, a follow up to her Cupcake Magic. It’s a lovely little book, with a donation going to the Battery Hen Welfare Trust, and I do think that if I can donate to them by buying the book and have a gorgeous cookie book it’s got to be a good thing. Don’t let its size fool you, it’s a treasure trove to be sure. I have a number of cookie cookbooks, and this one falls into the use-me type. I would absolutely have bought this for the children chapter alone. It contains a number of home-made versions of bought biscuits such as jammy spoldgers and party rings the pictures just look so fabulous! Though if you don’t have little ones to feed there is a lot more in there for adults and children alike. My only irk with this book is the recipes all say "makes one batch" maybe it’s just me but I like to know a rough guide of how many delectable cookies I am likely to end up with. That aside it’s a prefect little cookie book. 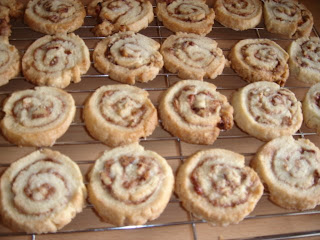 Oo-oo Biscuits
Anyhow, normally I make chocolate biscuits first from cookie books, but I gave up cooking with chocolate during lent, so had to look at other first-bakes, and what a first bake they were. The Jammy Splodgers were delicious, and very pretty indeed. I followed this up with Mildon Flapjacks, which I’ve baked again since, we have a flapjack monster in our house (you know who you are sweetie!) and these had just the right crispy edges and slightly chewy insides. Then there was Oo-oo Biscuits, cinnamon, pecan swirls, crisp and yummy, then once lent had ended Chocolate Orange Biscuits a la Terry, these when they have been just baked, and let cook a little (say half an hour), but still squidgy inside were a chocoholics delight. When they are cold they are hard-ish cookies, still good but good in a different way. 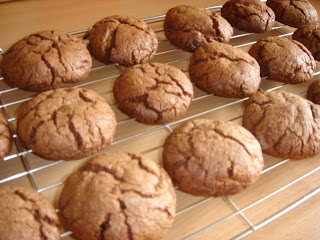 Chocolate Orange Biscuits a la Terry
Next I have my sights set on cheddar and thyme savoury cookies and white chocolate and cardamon cookies, watch this space! 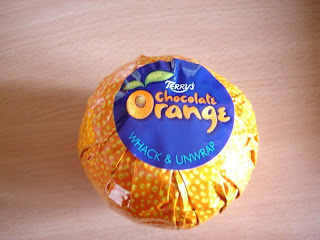 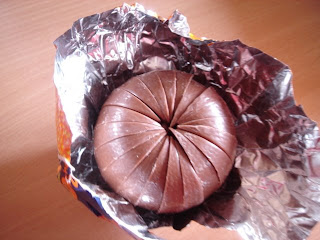 The cookies sound wonderful - you can't go wrong with a Terry's Chocolate Orange. I hope all the chocolate didn't go into the cookies!!

ROFL K-J half your luck! It's such a pleasure to think of my favourite cookbook collector being overwhelmed with beautiful cookbooks:D I am SO ready to read about the Cheddar and Thyme (?) recipe and ALL those sweet delights look like they belong in a boutique cookie shop:D So professional and incredibly tempting!!

''my pile is so high and I just can’t seem to get to the bottom of it. Please tell me it’s not just me!''

Personally I blame the book-elves; they sneak in and add extras when you've already got a pile to go thru...

It is not just you!!!!
At least it looks like you have been very busy, making a big effort to get through them.

It's so not just you! I too, have a hunk of carpet I haven't seen in ages. I get through a new cookbook and, imagine that, two new ones have taken it's place!!

Thank you for your comments :)

Those cookies look wonderful K.J. I love your new header with the Jammy Splodgers :0)

LOL... I also have books piled high too - in fact I had to move a few off the pile because it looked like an avalanche was about to come my way from the coffee table...eek...

You are definitely not alone! I have bought a few books lately and have more on the way. I ordered Cookie Magic a few months ago and this is another great book to have in your collection. I've not baked from this book yet but after seeing your yummy treats I'm going to have to bake something soon!

I was looking for such a feature.Hope to read more interesting articles.Thank you for this.great job.

Thanks a lot for these wonderful article that you share. :) thumbs up!

All the cookies in here are so delicious. Im a cookie lover.. hmmm.. Im drooling already. It really looks Yummy. :)

The recipe for chocolate orange biscuits works and taste is awesome, thanks for sharing such recipes and expecting more recipes like these.