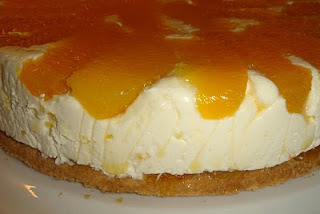 A quick post here as I’m late, I did make the challenge in time, but didn’t manage to post yesterday. 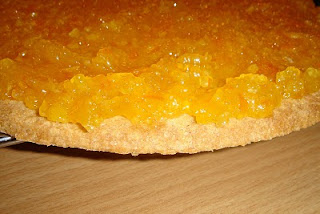 Sablee and marmalade
This months Daring Baker choice came from Jennifer of Chocolate Shavings. A dessert that she first made while she was at the Alain Ducasse Cooking School in Paris. It is a baked pate sablee, home-made marmalade, set gelatine cream and orange-caramel soaked orange segments and some more of the sauce on the side. It’s moulded upside down and turned out, I made it family style in one bid (8") cake tin as that suited how I was serving it best. Individuals moulds would be lovely too though. 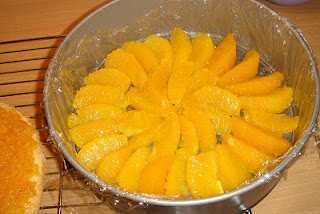 Orange segment lined cake tin
It’s a dessert with numerous stages, but well worth it we thought, it was a gorgeous, creamy, fruity, treaty dessert. The gelatine set cream is one of the very best I’ve come across, a member of the Daring Bakers, Heidi (who doesn’t have a blog) did it with strawberries in heart shaped moulds, they were absolutely gerogeous! Will give that a go in the Summer-time, I just know it’d be delicious. 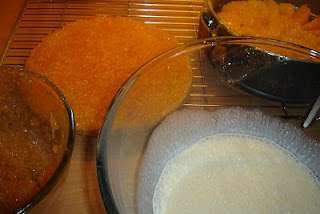 Ready for the set cream to be mae and the whole dessert assembled
With thanks to Jennifer for choosing a fabulous dessert. Recipe and blogroll here on the Daring Kitchen website. 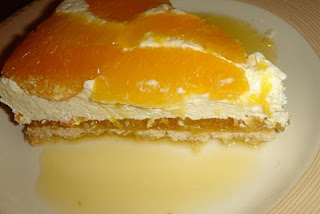 And the Winner of Eat Me Is 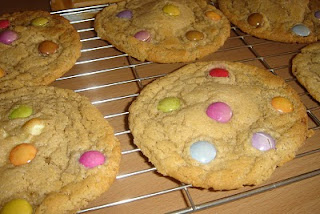 Smartie Cookies, after baking
The winner of Eat Me! The Stupendous, Self-Rising World of Cupcakes and Bakes According to Cookie Girl by Xanthe Milton is Carla of Four Foodies. I’ll be in touch about sending it to you! Well done Carla, and thank you to everyone who entered.
Here is a couple more recipes I’ve made from this excellent book: 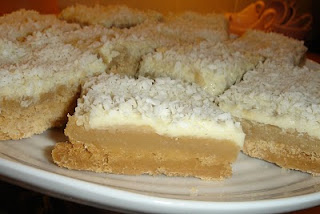 Snowdrift Shortbread
I take on Millionaires shortbread, just with white chocolate and coconut on top, very good, best on day made we thought. 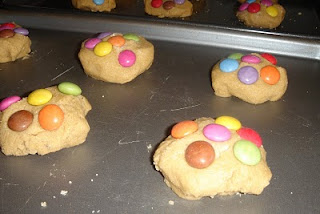 Before baking
Smartie Cookies
I’ve tried a few Smartie cookies in the past, and this one is the clear winner. I suspect it’s the chopped white chocolate that is enclosed into the balls of uncooked cookie dough before being studded with the colourful smarties. I made this for my little one and a friend who came to play on Friday. The friend said she had tried (bought) smartie cookies before, and refused a taste! Isn’t it always the way? Best laid intentions and all that. Cookie Girl says these are just as loved by adults as children, and it’s true; the little friend must have been the exception to the rule - everyone else has loved them and my batch has all but disappeared!
Think I’ll do Easter cupcakes and Easter cookies next. Mmmm.
Posted by Kelly-Jane at 09:24 3 comments: 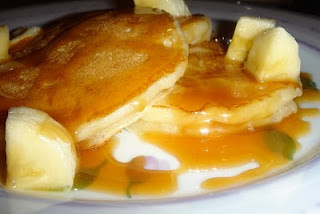 Banana Pancakes with Caramel Sauce
Sometimes when browsing the net in search of new books -be they newly published, or an author that has so far gone unnoticed – it is possible to stumble across someone who fires up your interest. This happened to me a last year when I found Ravinder Bhogal’s Cook In Boots for pre-order, it came out in May 2008. It was presented in an upbeat modern manner with amusing chapter heading and subheadings.
In due course it arrived, and it is just the very epitome of an upbeat modern girls (boys too perhaps) cookbook. Before I started cooking from it I saw Ravinder on the Good Food channel (UKTV as was then) cooking a recipe from her book (Oreo Cheesecake if you’re curious). I warmed to her immediately, she’s a pretty, well dressed, well spoken, fashion journalist and home cook. She won a search by Gordon Ramsey to find a new Fanny Craddock, and the blurb at the back of the book say she beat off over 8,000 other entrants to take the crown.
It’s a fashionable book, nicely presented with good humoured text and fun play on words in parts. It’s got some lovely pictures including shoes and boots in the chapter heading pictures, if that’s your thing. More than this though, it’s a good cookbook, one I feel actually comes from the heart of the author, and obviously essential to a good cookbook, the recipes work.
I read online that she is currently working on her second book, I scan the book sites regularly to see what it will be and when it’ll come out, it’ll be going in my pre-order basket for sure.
Back to the present though. Here is a selection of some of the recipes I’ve made from the book. I should have perhaps posted a shorter post sooner, but I want my blog to be true to how I cook, and it’s good to be able to say that 10 months on it’s still in my current cooking and reading pile. Indeed, post two about this book is currently percolating away! 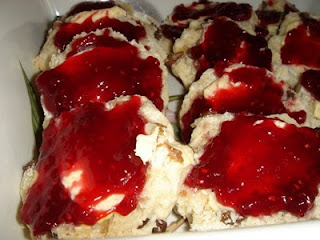 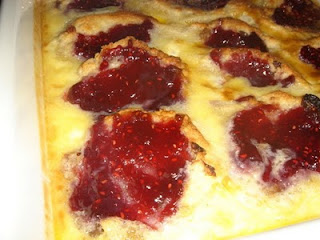 Afternoon Tea Pudding
This was my first try last year, when I was just desperate for a quick, comforting, sweet pudding. This fit the bill nicely, basically a bread and butter pudding made with scones and jam. I don’t recall now why I needed a comforting pudding, but what I do remember is that this one did comfort. 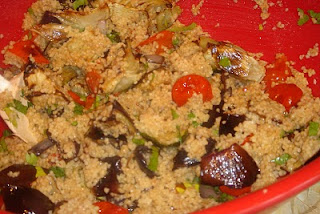 Couscous and Roasted Vegetable Salad
I liked this, but would fiddle a bit next time, more pomegranate molasses to up the flavour stakes. 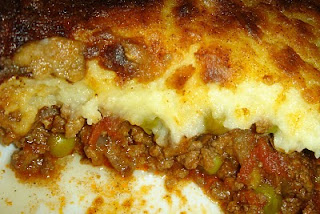 Spicy Shepherd’s Pie
Minced lamb and subtle spicing; think keema with mash on top. Spiced but although there is chilli in it, it’s not too hot – or at least it wasn’t with the chilli I used, we liked this one. 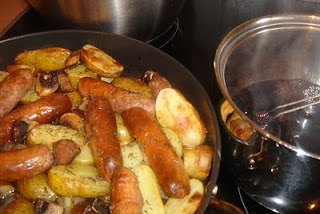 Hot Sausage Roast with Sweet and Sour Gravy
I did the sauce separately in a pan, which made it not what it was intended to be, as I knew the little people wouldn’t like the sauce. This was ok, but I prefer some of other dishes of this type that I already make better. 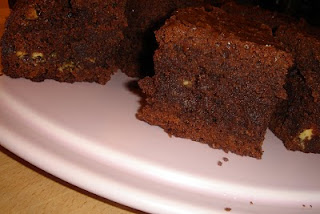 Double Chocolate Orange Brownies
As a confirmed lover of orange and chocolate together, I have no idea why I’ve not thought to turn the flavour combo into a brownie myself. Works very nicely indeed. 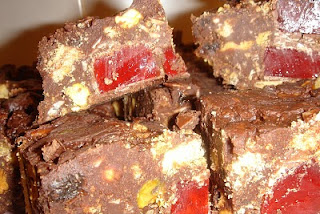 Turkish Delight Rocky Road
The Turkish delight is great in the rocky road. I’ve actually been thinking about trying this myself for ages, when on Nigella dot com someone asked for ideas for marshmallow replacements in one of Nigella’s rocky roads and I suggested Turkish Delight.I’d put a bit of golden syrup in the chocolate mixture next time, as even with the Turkish it needed it I thought. 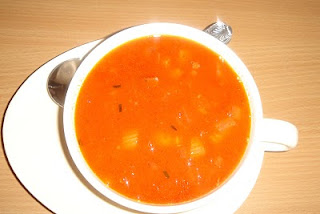 Pasta, Chorizo and Bean Soup
This is a very very good soup. Veggies, pasta, beans and the essential chorizo sausage. What’s not to like there?! 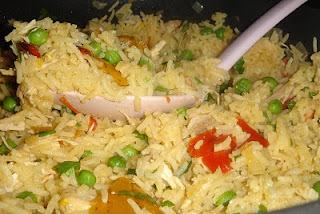 Left Over Roast Chicken Paella
A good use of the leftover meat from a roast chicken. A nice one to add into your reportiore. It’s not real paella, but it is a good dish. 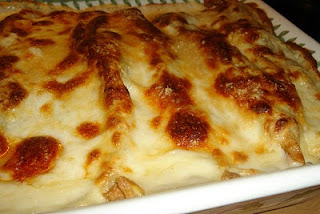 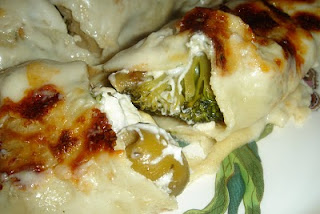 Dill Crepes with Green Vegetables and Feta
These were a bit of work, crepes, bechamel and vegetable filling, but I thought they were worth it, incredibly filling too. 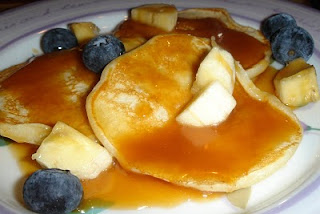 Banana Pancakes with Caramel Sauce
I made these for pancake day (Shrove Tuesday), they were great! A proper caramel sauce is just what the bananas and pancakes needed, I had some blueberries so added them to the plates when serving, and a worthy addition they were too!
Posted by Kelly-Jane at 04:03 8 comments:

Eat Me Review and Cookbook Giveaway 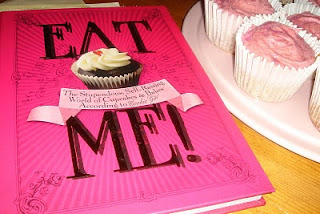 I can hardly believe that it is the Third Anniversary of my blog. Time flies and all that… and of course my interest in food, cooking and cookbooks is as vibrant as it ever was.
To celebrate the Third Anniversary of Cooking the Books I’m giving away a new copy of a cookbook which I bought for myself months ago on pre-order and which arrived last week.
It’s by Xanthe Milton - Eat Me! The Stupendous, Self-Rising World of Cupcakes and Bakes According to Cookie Girl. How is that for a title? A fabulous book on baking cupcakes and cookies. I really like it, it’s just my kind of book- girl-y, a little whimsical and a whole lot tempting. Not to mention indulgent, and I love to indulge my family and friends with little sweet things, especially when it’s things that will give a lift to one’s heart and soul. There is something about baking for someone else, or having them bake for you that is special far beyond the sum of the time and ingredients involved. I want to make half the book, right now, this very minute!
Xanthe took a sabbatical from acting and started baking and delivering bakes to offices, this led to a stall at Portobello Market, cupcakes being sold by Selfridges amongst others and she also writes Cookie Girl columns for The Grove magazine regularly, her website is here. She has an obvious real love for cake, cookies and baking. With chapters including recipes for cupcakes and cookies charting the four seasons plus a party chapter too. A taster of some of the delicious recipes are: Easter Egg Cupcakes, Lemon Finger Cookies, Bounty Cupcakes, Blueberry Clouds, Orange Polenta Cookies, Snowdrift Shortbread, Jack Daniel’s Cupcakes, White Christmas Cupcakes and Banoffee Cupcakes. 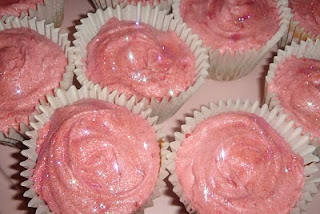 White Chocolate and Raspberry Cupcakes
The picture above is of the one I’ve baked first, and I had a very hard time pinpointing the first one I can tell you; but pinpoint it I did and white chocolate and raspberry cupcakes were soon baking in my kitchen. Vanilla sponge with fresh raspberries, filled with white chocolate ganache and topped with a fresh raspberry buttercream icing. They are lovely, the ganache really works so well and takes a raspberry cupcake to another level.
To enter the competition please leave a comment saying you’d like to enter. It is open until 12.00 p.m. on the 20th of March 2010. The winner’s name will be drawn from a hat and I’ll post the winner on the 21st of March 2010. Good luck!
Posted by Kelly-Jane at 01:36 40 comments: