This is a lovely little cookbook. Taste Le Tour Regional French Cuisine by Gabriel Gate published by Hardie Grant in 2011. It’s pretty – look at the cover, it looks like a pretty box

from an exquisite French patisserie shop. The cover is a little puffy too and this emphasises the luxury effect. It’s called Taste le Tour, as it is a book that travels through the different regions in France that the actual Tour de France bicycle race travels to. The difference being that you don’t need to be able to tackle the big race itself, you get to travel via your own cooker!

I think it’s a charming book, not only because I like pink things (!), but also because of its layout and charming illustrations by Francophile artist Antonia Pesanti. There are no photographs of the finished dishes, but there are some drawings of sweet dishes at the back. Antonia’s drawings give a delightful backdrop to the book.

Gabriel Gate is a Frenchman who trained as a chef in France before moving to Australia. He is now a cooking teacher, author and TV presenter. The food is presented in a classic format with chapters being: *Soups, Entrees and Vegetables* Fish and Seafood* Poultry and Rabbit* Beef, Lamb and Pork* and *Cakes and Desserts.

Now is the perfect time to cook from this book as July is the month of the Tour de France race. Though it would be a shame only to use it for one month of the year! The food is classically French and Gabriel’s recipes are easy to follow, I made three dishes (see below) and we liked them all. He tells you on each recipe which area it comes from. Some of the other dishes I have marked to try are: Silverbeet Gratin, Provencal Vegetable Bake, Chicken Casserole cooked in Reisling, Lamb Casserole with Green Olives, Summer Fruit Mousse and Raspberry Tartlettes. Here are the three I tried:

I made this as one big trifle. It comprises a cooked custard (crème patisserie), trifle sponges, raspberries and a little orange and Cointreau. The custard and cream are folded together for an easy trifle topping - and a delicious one too.

This should have been scallops the Parisian way, but when I went shopping there were no scallops… so prawns it was. A veloute sauce enriched with cream, egg yolk and cheese. It did indeed taste very chic and Parisiene. It was fast too. I’m going to make it again soon.

I love apricots, but they taste a whole lot better if they have been cooked. The sweet poaching liquid was flavoured with lemon, orange and vanilla. I took out some for little one, and then more or less followed the recipe by adding in a little Amaretto (instead of Armagnac). They were really delicious with or without the alcohol.

Next Review up: Cupcakes from the Primrose Bakery 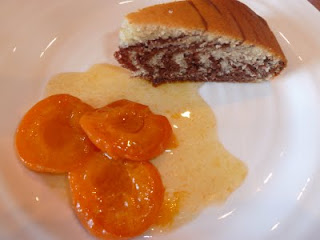 This months cake is still from Cake Keeper Cakes by Lauren Chattman published by The Taunton Press 2009. It’s something I’ve been meaning to try for ages, so was pleased to give it a whirl.

Short and sweet from me this month! It’s vanilla cake and chocolate cake mixtures dropped into the pan in spoonfulls, to give a bulls eye effect, which looks stripey when the cake is cut into. Mine wasn’t perfect by any means, but there was a definite stripe in it, wavy like a zebra’s coat. It was fun to give it a whirl, and now that I’ve at long last tried the technique, I must get round to giving a stripey cheesecake recipe I have been meaning to try a go too.

Do have a look at the Cake Slice Bakers blogroll, some of the zebra cakes are really awesome!

Next review up: Taste le Tour 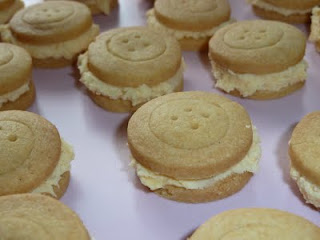 I’ve been following Ed’s blog for a while now. He won the British Bake Off competition on TV in 2010. He also has a cookbook due out later this year. A few weeks ago he posted about custard creams that he had made, and they looked fabulous. Now, I have made custard creams before but they included cheap white fat, and I really didn’t like the mouth feel that this gave at the end of the biscuit. Ed used all butter in his, and I thought why not? – I’ve been meaning to play around with the white fat issue for ages now, because I do like a custard cream. In fact just typing this I fancy making them again – right this minute!

In Ed’s pictures the biscuits look like little button discs, one of the commenters on his post said so, and I thought so too. So I took this one small step further and marked them to look like actual buttons with a round cutter and a cocktail stick (pick) for the ‘holes’. The following recipe is the one Ed has on his blog, with the exception of some milk that I added to the filling. To see Ed’s neater piped filling, and quite honestly better pictures than mine do have a look at his post here. We really enjoyed these. 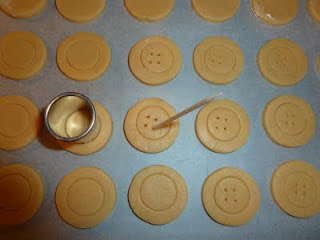 (1) To make the biscuits place the flour, custard powder, icing sugar into the bowl of a food processor and pulse to combine. Add in the butter and vanilla bean paste and pulse until the mixture begins to come together. Tip the mixture out onto the work surface and bring together into a uniform mass with your hands. Wrap in cling film and refrigerate for 30 minutes.

(2) Place the dough on a lightly floured work surface and roll to a thickness of 3-4mm. Cut out small rounds about 3cm in diameter, place on a Place on a baking parchment lined baking tray. Next mark half of them with the tines of a fork two or three times, not going all the way through. Now, to make the ‘buttons’ take a smaller circular cutter and press into the unmarked rounds, again not going all the way through. Finally take a cocktail stick and make 4 button holes in the center of the ‘buttons’. Refrigerate the trays for 15 minutes or until firm. Whilst chilling preheat the oven to 180C/160C Fan/350F. Bake the biscuits for 10 minutes or until just starting to colour around the edges. Cool on a wire rack.

(3) For the filling place the butter in the bowl of an electric mixer and beat until light and creamy about 5 minutes then slowly incorporate the icing sugar and custard powder and beat in high until smooth and fluffy. Beat in the 25ml of milk, if you think it needs it. To make it smooth and spreadable

(4) Spread the butter cream with a knife onto half of the biscuits, the plain half! Sandwiching them together with the top ‘button’ biscuits. Or Place the buttercream into a piping bag fitted with a small plain and pipe the filling instead.

Next Review up: Taste Le Tour 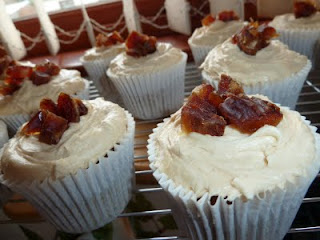 After the success of their first cookbook, last year, here is the second offering on the cookbook front from the famous bakery. The Hummingbird Bakery Cake Days by Tarek Malouf and the Hummingbird Bakers published by Collins in 2011.

A very nice book it is bigger than the first one. Plenty of pictures of the finished baked goods too. It has a good layout, with different colours used in pretty ways. Cupcakes, cakes, loaf cakes, savoury muffins and more. This book takes you through a year at the bakery, and this is clearly reflected in the flavours of the baked goods in the various chapters. The chapters are: Valentine’s Day* Spring Weekend Bakes* Mother’s and Father’s Day* Easter* Summer afternoon Tea* Birthdays and Celebrations* Rainy Day Treats* Halloween and Bonfire Night* and Christmas.


I couldn’t wait to get baking from this one! They say the cupcake is waning in its popularity; well not in my heart, head and kitchen it’s not!! Sticky Toffee Cupcakes were my first bake, and they were closely followed by the next two here that I’ve tried. My friend Kate made and gives the thumbs up to the apple and walnut cupcakes too.

Some of the other recipes I have marked to try are: Apple Blosson Cupcakes, Caramel Cupcakes, Rose Cupcakes, Lemonade Cupcakes, Pea, Ham and Feta Cheese Muffins, Gingerbread Cupcakes and Apple Crumble Cupcakes – to name but a few.. 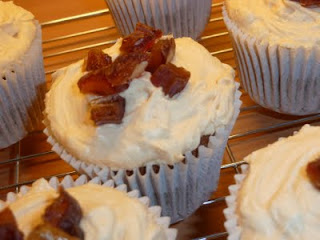 
Goodness these are so good they are dangerous! Hubby has declared this as his favourite cupcake ever, ever, EVER! Mind you it’s with good reason, moist sponge with the gorgeous mejool dates I used providing contrast and a dulce de leche buttercream frosting. I topped them with a few more chopped mejools. There was a lot of icing left over, and I’d halve it next time. There will be a next time, I think these might become hubs ‘birthday cake’ this year. I didn’t work out how many calories these have, and I definitely don’t want to know, it would spoil the joy! What I will say though is that I would have bought the book for this recipe alone. 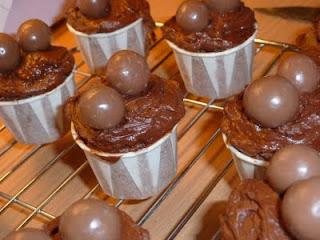 
As if to contrast the success of the first one, this one didn’t do it at all for us, the cake was neither chocolate-y or malt-y enough and the frosting was just not sweet enough. Can’t win them all. 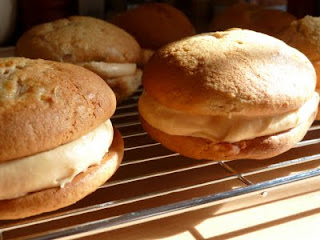 
This one however was another hit. I’ve been working myself up to making whoopie pies for some time now, and they are fabulous. They are really filling so small to medium in size would be better than large – well that’s what I think anyhow. Cakey, creamy, moist – delicious! 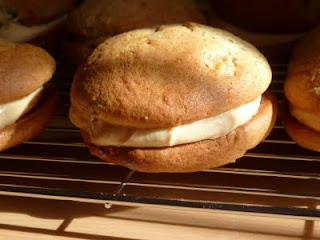 Next Up: Custard Creams