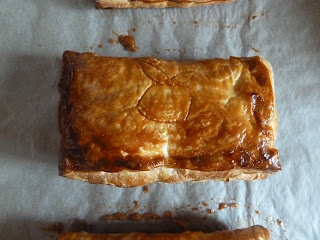 I’ve been cutting back my sugar intake recently, but last night I needed a pudding, something warm (it’s still quite cool here!) and comforting. So I made these for dessert last night, and had to share them! If you’ve only ever tried bought ones, you are in for a real treat! A bought turnover always seems to disappoint, too much pastry and never nearly enough filling. That’s not just me is it? These have flaky puff pastry, a juicy apple filling, really enhanced with the cinnamon and ginger. I served Lorraine’s custard with them (from the same book) and they were a real hit, even the little miss was keen, and asked for them to be made again – and soon Mummy! 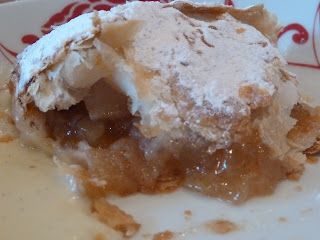 A fabulous low effort high delivery pudding. There are my take on the little warm Bramley apple pies from Lorraine Pascale’s Fast, Fresh and Easy Food (Harper Collins 2012). See here for her recipe and a little clip from the TV series of her making them. It is worth noting that the apple filling remains extremely hot, so do be careful!! 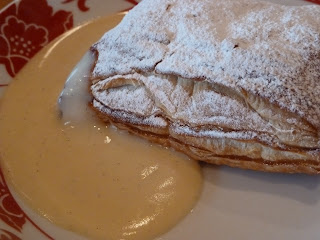 Zest of half a lemon (optional)

(2) Mix the apple sauce with the ginger and cinnamon, and a few teaspoons of sugar, to taste.

(3) Unroll the pastry and cut into 4 rectangles, brush round the edge of each with beaten egg (keep the rest of the egg!). Fill with the apple filling, then carefully seal the edges. Place on the baking sheet and then cover with clingfilm and place in the fridge for a couple of hours, longer would be fine too.

(4) When ready to cook preheat your oven to 200oC, (180oC fan) 400oF, Gas Mark 6. Remove the cling film and brush the top of the pies with some of the remaining egg. Then bake the pies for 25 minutes. Leave to cool a little, as the apple filling is scalding hot!
Posted by Kelly-Jane at 01:40 10 comments: