The Great British Bake Off - How to Bake, Review 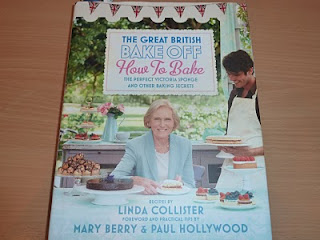 This one is different from last year's book and a lot more of a `tie in' companion to the 2011 series. A good amount of pictures (though not all recipes are photographed by any means), well presented and easy to follow. Chapters are: *Cakes* Biscuits & Teatime Treats * Bread * Pies and Savoury Pastry * Tarts & Sweet Pastry* Patisserie * Puddings & Desserts *Celebration Cakes*.

The first seven chapters have a 'Technical Challenge' by Paul or Mary, and there is also a number of `How to Make the Perfect' recipes. For example, the Biscuits and Teatime Treats chapter has Mary's Brandy Snaps for the technical challenge and the How to Make the Perfect recipe is for Almond Tuiles.

There are also coloured pages from the contestants with their recipes. It doesn't say who each recipe belongs too, but they are certainly easily identifiable as Bake-Off recipes, in the introduction to the book these bake off recipes are described as `the most successful recipes from the bakers'. There is a code to enter online to be able to upload the recipes from the final.

As well as the step by step recipes mentioned above there are a good number of pictures of the finished bakes, they are not all pictured, but there are plenty for me. The layout is good, clean and easy to follow. If I'm being picky, I would say I would have liked to have known who each of the contestants recipes came from. I’ve jotted the names down beside the recipes while watching, but would have liked them to have been credited to their respective contestants in the book as well. It's a good baking book, relevant for a new or inexperienced baker who is looking to learn; but equally so for experienced and keen bakers on the look out for new recipes.

EDIT: This is the day after the bake off final, and the booklet from the publishers (all 27 pages) is an excellent addition to the main book. It gives all the recipes from the final and also tells you who all the bake off recipes in the book are from. 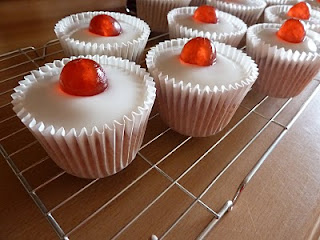 The first recipe I tried before it was even on TV was Holly’s cherry bakewell cupcakes, they were very good too, almond-y sponge, lemon icing and a cherry on top. I used old fashioned dyed red cherries, as my Mother and Hubby tell me in no uncertain terms that the natural ones don’t taste the same! Hubby was especially taken with these, and the cake dome was empty very soon. Click here for the recipe. 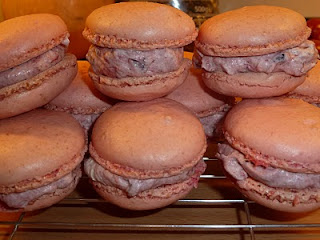 This one was Jason’s recipe, one of a trio of ‘mocktail’ flavours, or cocktails without the alcohol. Almond shells filled with a sort of cranberry and orange cream fool mixture. I overfilled these because I wanted to serve them as a dessert with *more* filling. They’d be lovely at Christmas when cranberry season is in full swing. Really looking forward to trying his Pina Colada macaroons too.

I reckoned I wasn’t going to bake another cheesecake, as we generally do prefer an unbaked one. However, when I saw Jo make this on the bake off it had to be made! It’s creamy with just the right amount of rum. Click here for the recipe.

Next Review Up: A Month in Marrakesh

Labels: The Great British Bake Off: How to Bake 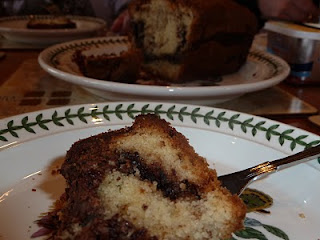 Well, in the Cake Slice Bakers group we bake one recipe per month from the same book for a whole year. This month is the last month for our current book Cake Keeper Cakes by Lauren Chattman published by The Taunton Press 2009. Usually we vote on a few options to select the cake for the month, however this month as it was the last one from this book we all got the opportunity to choose the cake to make ourselves.

That was quite hard I can tell you! I was torn between three: cranberry walnut bundt cake with maple espresso glaze, dulce de leche coffee cake and the one I made Nutella Swirl Pound Cake. I thought about baking two, but I always seem to have a longer list of want-to-bakes than I have opportunities and calories to eat them!!

So Nutella cake it was. This was an unusual cake, tight tender crumb and big swirls of nutella. The swirling was a bit difficult, and maybe I didn’t swirl enough, but then again mine looks pretty much like the picture in the book, so maybe this was the kind of swirl that was aimed for, who knows! It was a nice cake, my lot liked it especially spread with a little butter, and right enough the butter seemed to draw out the very essence of the nutella, which must be a good thing.

If any readers would fancy joining the Cake Slice Bakers please email your Name, Blog Name, Blog URL and the email address you use to access the your blog site to: appleandspice[AT]hotmail[DOT]co[DOT]uk with 'New Cake Slice Member' as the subject. Spaces are limited, but if you fancy joining do drop Katie an email.

If you'd like to have a look at the other recipes made by our members this month do have a look here for the Cake Slice Bakers Blogroll. Can’t wait till next month to reveal our new book!!

(2) Combine the eggs and vanilla in jug and beat lightly. Place the flour, baking powder and salt in a medium bowl.

(3) Cream butter and sugar in an electric mixer until fluffy. Turn mixer to low, add egg mixture in slowly, scraping down sides as necessary.

(6) Bake for about 1 hour and 15 minutes, or until cooked. Let cool in tin for 15 minutes, invert onto wire rack and cool completely.

Next Review Up: British Bake Off How To Bake 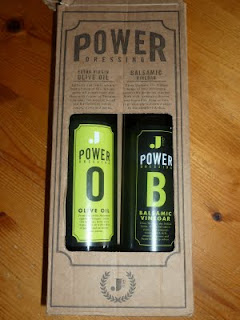 A little while ago I was sent the Power Dressing set from JME, Jamie Oliver’s range. They came packaged in a cardboard box together, a sort of cute wine bottle box, but bespoke for the JME bottles. The great play on words really appeals to me, drawing parallels between power dressing for a business meeting and power dressing your salad =)

A great pair for salad dressings they are too, good balsamic vinegar and extra virgin olive oil that is bright, green and fruity. Nice idea for a gift or a little luxury for your own kitchen.

One of my friends often brings a great bottle of oil when invited to a dinner party, as well as the more usual wine. Being the kind of cook I am, that really appeals to me, the oil lasting a lot longer than the wine! With thanks to JME and James for my review set. Click here for stockists.

Next Review Up: The Great British Bake Off How To Bake