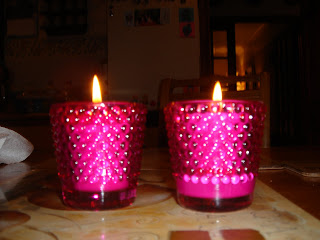 I adore these beautiful candle holders that I was recently lucky enough to be given. They are the most fabulous colour, and they came with raspberry scented candles that smell so good! The glass is a brilliant magenta colour, and they have come out pretty well in the pictures. They are decorated with hobnail bumps, well at least I think that is what they are.

I have often read about and seen such pretty hobnail glasses in Martha Stewart’s books and am thrilled to now have a little bit of my very own!
Posted by Kelly-Jane at 11:00 3 comments:

Not quite Traditional Beef and Guinness Stew

Now I should say up front that this one does not come from a cookbook. Well not yet. It is from The People’s Cookbook television (UKTV Food) programme, and although there will be a book it won’t be until after September when the second series airs. I printed the recipe from their website..
http://uktv.co.uk/index.cfm/uktv/Food.recipe/aid/580536
The programme is in a format that I really like. Six people per programme each with their favourite recipe. They are put into pairs and there is a cook off, with Anthony WT or Paul Rankin doing the cooking under the persons guidance. So 3 recipes per programme go into the cookbook. This one will be going into the cookbook, but most of the recipes I have liked have not won! 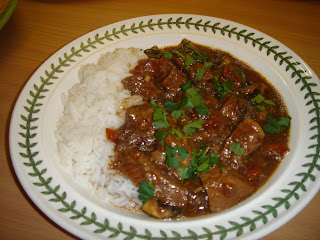 It is a gorgeous beef stew. The not quite traditional aspect is that there is ginger and soy sauce in it. These additions along with the Guinness make for a wonderfully deep, rich, extremely beefy and savoury gravy. It is much like any other beef stew in that there are onions, carrots and beef stock in it, as well as the extra additions. At the end of a couple of hours in the oven, a finishing touch of pan fried mushrooms seasoned with a little more soy sauce are stirred in. The creator whose parents are Chinese and Irish served it with rice and a sprinkling of parsley, so I did too and it was really beautiful.
Posted by Kelly-Jane at 08:14 5 comments: 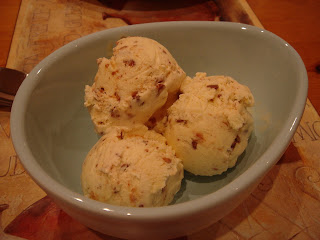 The dime bar ice cream is one that we absolutely love in our house. I have made it often since Nigella Lawson’s Forever Summer was published.
It is just so creamy, chocolate-y and the caramel shards offer a little bit of crunch. I quite like Dime Bars as they are, but in this ice cream Nigella makes them something much more. Real comfort in a bowl.

Here I bought a local organic chicken, which was a bit pricey, but it was a big bird and the taste was superb. I have tried other organic and corn fed chickens and found them to be a bit tasteless, but this was the real deal.
Here I served it with new potatoes sliced and tossed in a couple of tablespoons of olive oil and a sprinkling of thyme. When I turned them over half way through baking (30–40 mins in my oven 180) I added in some cherry tomatoes, they are so good the way they burst and mingle their juices with the potatoes. Nigella’s bread sauce from Feast and some green veg, plus pan gravy. 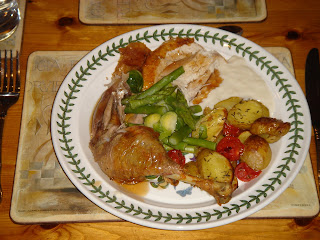 I have a good collection of cookbooks and enjoy both reading and cooking from them, and this is where the title of this blog comes from – my joy in cooking from my books. Oh and of course eating I’m pretty keen on that too!
I’ll blog dishes I cook, and maybe other things that are food or table related, because the other things I seem to amass is cooking dishes, serving dishes, plates, glasses, pans, pretty bits and pieces for the table and so it goes on!
I hope you enjoy it.

I have not started to blog my food yet, but hopefully somewhere soon...
Posted by Kelly-Jane at 08:51 1 comment: