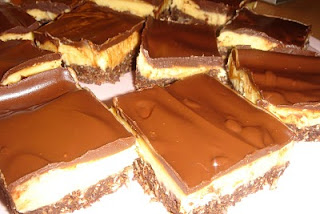 This months Daring Baker recipe was chosen by Lauren of Celiac Teen. She chose home-made graham crackers, to be transformed into Nanaimo bars, a special Canadian bar.
I should come clean and tell you that I’ve not tasted a graham cracker out of a package before, so I don’t know if mine were in any way realistic! (in either looks or taste). We liked them though, crispy and good, really delicious warm from the oven. I halved the recipe for the crackers, but we would have eaten the rest, so maybe I shouldn’t have, next time I’ll know. 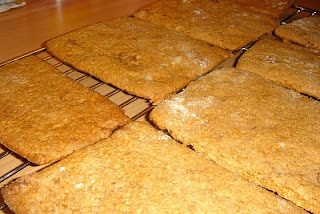 I have always substituted our UK Digestive biscuits for graham cracker crumbs when I’ve seen them in US or Canadian recipes, but our Digestives have a different taste. The crackers were easy to make, the dough was a bit sticky, but not badly so. 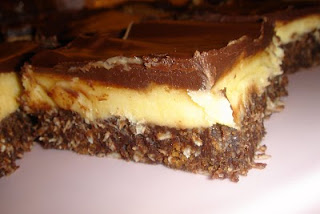 The Nanaimo bars themselves were lovely. I’ve made them before from a Marcy Goldman recipe, so I knew we’d be in for a treat! Lauren had suggested doing them a s a gluten free treat, I used wheat flour, but only because I was determined to do this months challenge and it was really snowy and icy, so I just did them with the flour I had in the cupboard, I didn’t fancy a white knuckle ride on the icy roads that day!

Anyhow, they are a chocolate-y coconut biscuit base, a custard flavoured a butter cream middle and a chocolate top.
Thanks to Lauren for choosing a lovely bar, and click here for the recipe for the graham crackers and here for the for the Nanaimo bars. Finally click here for more Daring Bakers sites to visit.
Posted by Kelly-Jane at 06:16 5 comments: 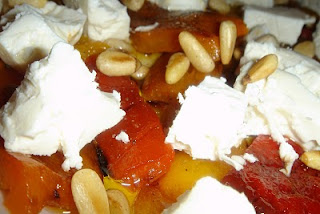 I’ve been offered a number of things to sample and review on my blog, and if I’m honest I don’t take up the offers most of the time. However towards the end of last year I was offered a sample of some products from Unearthed, and after viewing their website, they are just the sort of company I’d buy from so I accepted. 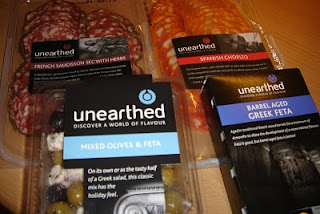 This is the package I was sent which arrived in a box with a big red ribbon round it – a nice touch I thought. I’ve very much enjoyed all the products, and they were all very good, and I would tell you if not! 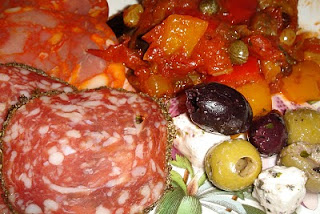 I served the meats and olives/cheese box with some of Giada’s (De Laurentiis that is) caponata and some bread too. We ate this for supper one night when there was snow, ice and WINTER outside, and it was a very welcome burst of sunnier climes. The French Saucisson Sec with Herbs was good, the herby coating making them floral are herbacous, yet still meaty and savoury. The Spanish Chorizo was just as it should be when sliced like this. I’d hoped to have a few olives left, but they were quite compulsive, so alas we ate them all!!
Find the recipe for the caponata here. 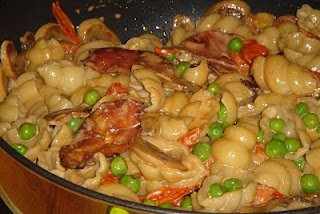 I had a little chorizo left, so pan fried it to a crispy stage, removed it from the pan, and made a creamy past a sauce, then added the chorizo back in at the end. 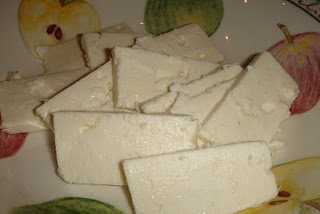 The last part was the barrel aged feta cheese. I made a grilled pepper salad for this one, you could buy a jar, but on this occasion I blackened and skinned the peppers myself. Sprinkled over a little olive oil and balsamic vinegar, teeny bit of salt and pepper, then topped with the really divine feta and a sprinkle of toasted pine nuts. I would have added chopped parsley, but I wanted little Miss to try is, and I know the parsley would have put her off. We all loved it, success! 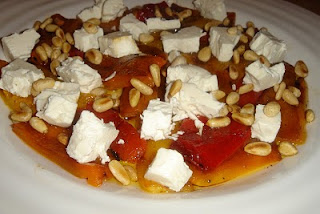 I had great plans for the rest of the feta, having earmarked a recipe for savoury muffins from Marcus Wareing’s new book Nutmeg and Custard. This was before I’d tasted it though, afterwards, we just nibbled it with some lovely biscuits, and let its amazing, superior flavour shine through. It didn’t have that nasty nip that some fetas can have, it was so well rounded and balanced. A really first class cheese in my opinion.
So thank you very much to the people at Unearthed for a lovely sampling taster, do have a look at their website, I’ll be ordering from them in the future for sure.
Posted by Kelly-Jane at 02:48 2 comments: 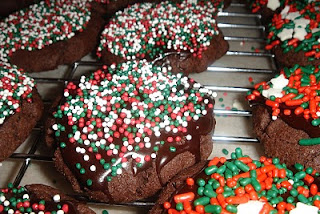 Well, Happy New Year everyone =) I hope that 2010 is a happy, healthy and blessed good one. I’ve been awol once again due to the ongoing flu-ey bug, the general hustle and bustle of December, followed by my Father passing away at Christmas time. It’s been good, but also extremely sad. I’ve been cooking though, it has been a calming act in my grief, surprisingly enough. I have to say I didn’t really ‘get’ Nigella’s comments before of taking solace through calming kitchen activity. I do now.
It’s a little late to be posting this in January, but here are some of the new things I’ve made from Nigella Christmas by Nigella Lawson this December past. A look through Nigella’s great Christmas book fairly puts you in the swing for Christmas cooking. A year on I’ve still cooked a good bit from it, and of course it is such a cheery book. I do wonder what her new one due out in September 2010 will be about… Anyhow enogh of my disjointed ramblings, here is the food. 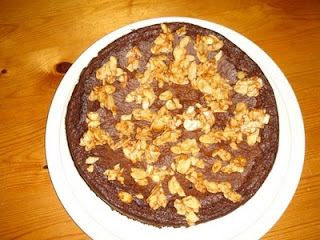 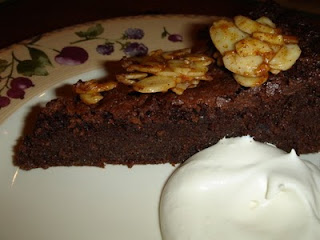 Chocaolate Almond cake with Cointreau Cream
This was a knockout! We really loved this, I down scaled the coffee a bit, as hubby isn’t keen on it, also sweetened the cream a little to take the edge of the alcohol. Gorgeous. 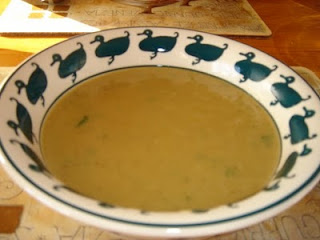 Lentil and Chestnut soup
This is a Nigella stalwhart, wwe liked it, but not sure I’d make it again, there was too much chestnut and not enough lentil for us. 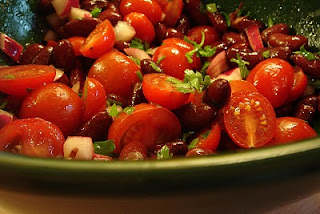 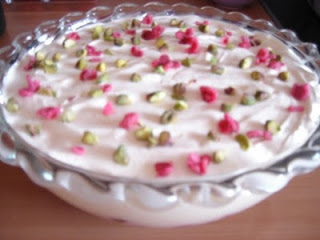 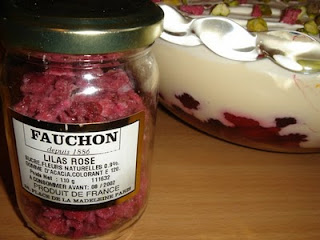 I know the jar is out of date, but I do put fresh stocks in!
Trifle
I made this as per the recipe, and it was too boozy and not sweet enough in my opinion. I had high hopes as Nigella’s trifles are usually fantastic, maybe this one wasn’t quite to our taste. It’s very pretty though, the pistachio and rose petal topping is one to be used on other trifles. 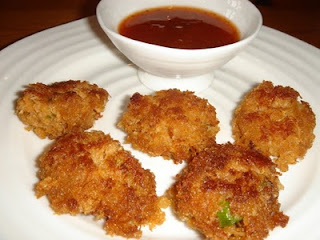 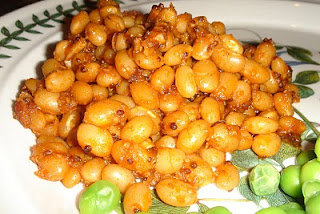 Boston Baked Beans
I made this and reheated it, they were good, my little people were not keen, it being too far removed from the famed tinned variety. 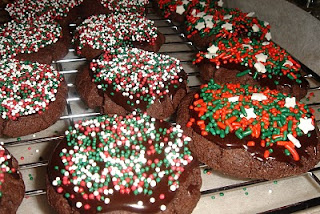 Chocolate Cookies
Chocolate (sort of) shortbread for Christmas time, with a chocolate glaze for the vibrant sprinkles to stick to. Mmmm. 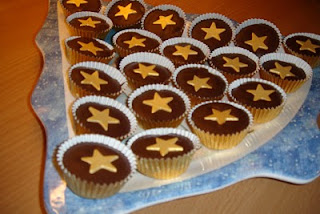 Chocolate Peanut cups
My hubby doesn’t like Reese cups, so I didn’t expect him to be wild for these, but Missy and I love them, so I knew we would be. I’ve made the bigger ones in How To Be A Domestic Goddess. Did a half quantity of the recipe to get 24 and that worked out fine. Baby peanut chocolate cups, sweet and yummy, Missy enjoyed helping with this one too. 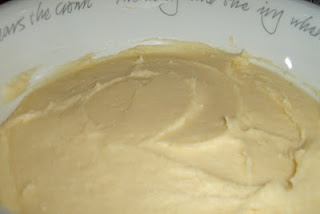 Rum Butter
Did this as a change from brandy butter, it was delicious. We had to restrain ourselves not to eat it with a spoon! 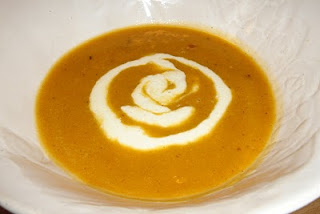 Butternut Squash Soup with Blue Cheese Swirl
Lovely soup this one, smooth and velvety with the fabulous blue cheese swirl to kick it up a notch. 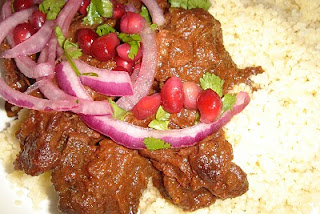 Date and Lamb Tagine with Red Onion and Pomegranate Relish
I made this one for Christmas Eve, which worked out fine, as made it the day before and it only needed a little work before supper time. It is sweet with the dates and also the lamb, not that I have issues with sweet (!) and the relish balanced it our perfectly. I served it with plain seasoned couscous with a big know of butter tossed trough the grains. 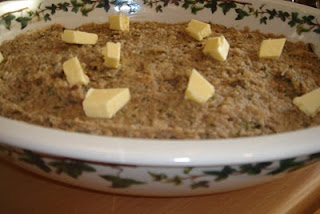 Chestnut Stuffing
Here is the stuffing I made for Christmas Day, I make it on Christmas Eve ready for the oven on the big day itself. It’s not a looker by any stretch of the imagination, but it tastes really, really good.
Posted by Kelly-Jane at 03:04 3 comments: