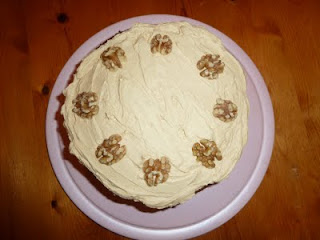 First off, apologies, I didn’t manage to do the Cake Slice baker recipe this month, but I’ll be back again next month for the last recipe from Cake Keeper Cakes.

Kitchen Recipes from the Heart of the Home by Nigella Lawson published 2010 by Chatto and Windus. I’m still cooking from this the most recent Nigella Lawson cookbook – and here is my next instalment.

This chicken dish was very light, not a favourite. I did use the leftovers in the pasta sauce suggestion in the book, and it was nicer with the touch of cream we thought. Won’t do this one again though.

We liked this one – all of us. Maybe not Nigella's most spectacular meatballs, but still a good midweek supper.

I’ve made this one a number of times, it’s really good. You do need some pine nuts and pomegranate seeds, but it lifts leftover lamb into a wonderful dish worth dreaming about in its own right.

A very moist and delicious sponge and a really dark icing. Instead of 300g dark chocolate in the icing I used 200g dark and 100g milk chocolate, but it was still too dark for us. I think sometime in the future I’ll try this sponge and the icing from the chocolate cake in Nigella Bites. Have very high hopes for that =) At its best two days after making we thought.

This is a store cupboard recipe, and quite quick to boot, but it’s good, chorizo sausage, chickpeas, apricots and tomatoes. The couscous with a bit of pasta in it and scented with cinnamon is quite unusual, but also good.

Not least because the one in my picture is not of spaghetti!! I bought this square pasta from M&S, cute don’t you think? Also not quite the recipe in the book because I reduce the anchovies to 1 for a half quantity. I like it though, light, quick and full flavoured.

The recipe in the book is for calamari, but I’m allergic to it so I used prawns. Spicy and good. Actually it’s on the very edge of my chilli tolerance, but still I like it. Beautiful colour too.

I’ve saved the best for last here, oh my goodness this is fabulous! It’s not cheap to make the first time as you need two liqueurs, but we really, really loved this! It’s cool, minty, creamy and so light too. Of course now I have the liqueurs - crème de cacao blanc and crème de menthe I can make it anytime. Whether that is a good this or not I don’t know!

Next Book Review Up: The Great British Bake Off How to Bake

Cupcakes from the Primrose Bakery 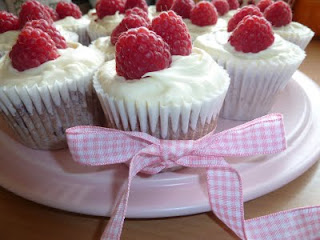 This book came out last year, and a lovely one it is too. Cupcakes from the Primrose Bakery by Martha Swift and Lisa Thomas published by Kyle Cathie Limited in 2010. I had this one pre-ordered, and have looked through it often, but it was only at the beginning of this summer that I started cooking from it. I’ve never been to the actual Primrose Bakery itself in London…well yet anyhow, one day I hope. Until then I am happy – more than happy to have their cookbook on my shelves and to be able to cook from it in my kitchen.


The book itself is a nice pale primrose yellow in colour, a nice touch I thought. Its chapters are ~Basic Cupcakes~ Basic Icings~ Festive and Seasonal~ Special Occasions~ Weddings~ Beyond Cupcakes~ Decorations~ and finally Techniques and Equipment~. There is also a handy stockists page at the back for UK shops and websites. The book is full of mainly cupcakes, but with a few cakes at the back too. Beautiful pictures that just make you want to pick them up off the page and eat. It is undoubtedly a good thing that I can’t eat a bit of each of them in one go! Cute little line drawings throughout as well.


I tried three out and they were all great, but if I had to play favourites it would be the Raspberry and White Chocolate cupcakes they were very good indeed!

Strawberry flavoured sponge, strawberry jam filling and vanilla icing. I added some strawberry extract to the icing and made it pink, but I am a tinkerer. Lovely, very Summery.

A good lemon hit and cute too. I made these as mini cupcakes.

Delicious. Raspberry filled and white chocolate icing, just perfect. The world is a better place with a batch of these under your cake dome, or in your tins!

Adapted Slightly from Cupcakes from the Primrose Bakery by Martha Swift and Lisa Thomas published 2010.

(2) Cream the butter and sugar (I use my mixer with the paddle attachment) until light, pale and smooth. Beat in the eggs one at a time until fully incorporated, mixing for a few minutes after each goes in. Meanwhile sift the flours into a bowl and in a jug mix the milk and vanilla.

(3)Add one third of the flour to the butter mixture, then one third of the milk mixing just to incorporate each. Do this twice more with each until all the flour and milk is used. Fold in the raspberry jam (stirring the jam first to loosen if you need to) to give a good rippled effect. Spoon or scoop the mixture into the 12 waiting cases. Bake for 20 to 25 minutes, or until cooked.

(4) Leave in the tins for 10 minutes, then transfer to a wire rack to cool completely.

Drop or two of Vanilla Extract

(1)In a food mixer with the whisk attachment (for ease) whisk the butter, vanilla, milk and half the sugar for a few minutes until smooth. Gradually add the remaining icing sugar, beating well between each addition.

(2) Melt the white chocolate, either in short (20 second) bursts in the microwave or on top of a pan of barely simmering water on the cooker top – take care that the water does not touch the bowl. Leave to cool a bit.

(3) Once cooled add the chocolate and cream to the vanilla icing that you have made to turn it into white chocolate icing.

(4) Make a hole in the middle of each cupcake big enough to take the teaspoon of raspberry jam, then top with the white chocolate icing. Finally place a raspberry or two on top.


Note: if you make this icing ahead it will need to be kept in the fridge due to the cream, beat well before using if you do this.


Next Up: Another helping from Kitchen by Nigella Lawson

Next Review Up: The Great British Bake Off How To Bake