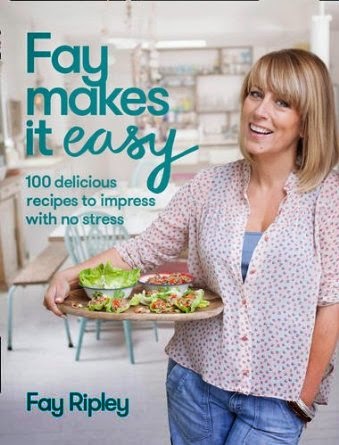 Well, I’d been anticipating this one, her third cook book. Fay Makes it Easy - 100 Delicious Recipes to Impress with No Stress by Fay Ripley published by Harper Collins in 2013. Perhaps I should look back before going forward, I enjoyed her first book, then her second one more, which to be fair probably puts Fay (or any other book author of any type) under some pressure to live up to expectations. ”And does it?” I hear you ask. Yes, I think it does!
I look to Fay for family suppers, you know inspiration for weeknight teas, that don’t take too long to make, but still deliver on taste and provide reasonably balanced plates for my family. I’ve made a number of dishes so far (some pics on Face Book page). Indeed one in particular was positively a minor miracle on the food front – more on that below though.
This book has more traditional chapters (as opposed to her second one which was days of the week) of – Morning Glory – Let’s do Lunch – Bite-Sized – Delish Dinners – Great Outdoors – Sweet Stuff . There are plenty of pictures of all the dishes, and the recipes are clearly written and laid out. Of course there are always Fay’s introductions to the recipes too, which made me laugh out loud on a couple of occasions. I won’t say which ones and spoil your fun though.
Some of the recipes I have marked to try are: Morning Muffins, Hollywood Raspberry Bircher Museli, Parma Ham and Melon Risotto, Sumac Roast Chook, Wasabi Tuna with Crispy Noodle Salad, Slow-Cook So-Good Beef Stew, San Choy Bau (recipe on the cover of the book), Miso Salmon and Coconut Rice, lastly on the savoury side is a grown up feast of Sozzled Spanish Chicken and Almonds, Patatas Bravas and Sweet Magic Kale.
On the sweet side there are Little Chocolate and Almond Bombes, Lemon and Pistachio Cake, Show Stopping Hazelnut and Raspberry Pavlova and Bounty Banoffee Pie.

Sweetcorn Fritters with Griddled Halloumi
Quick fritters to make and cook, I did mine with chopped yellow pepper (as hubby won’t eat sweetcorn off the cob…) and they go so well with the halloumi. Fay suggested sweet chilli sauce to go with this, and that was good, however my daughter’s choice was balsamic glaze and that was even better.

Parce the Spanish Parcel
This recipe is in the Bite-Sized chapter, though I wanted it for a lunch so did it as one pie with one sheet of pastry. Tomatoes, Cheese, chickpeas and chorizo goes into the filling. Really lovely, and little one ate chick peas willingly!

The Vicar’s Pulled Pork
This was easy to do, I liked it but think I like my pulled pork with a more BBQ-y vibe. My Mum particularly liked this.

Fresh White Slaw
For the pulled pork, a fabulous little recipe of raw veg (cabbage, fennel and apple) with an Asian inspired dressing. Again, little one was keen, and I really thought bribery would be required to get her to eat it!

What a Whizz Sticky Date Pudding
Easy to make, and lighter than my dinner party normal one. The sponge, though baked has a distinct moist steamed texture going on.

One-Pot Spiced Chicken and Apricot Rice with Mint Raita
This is it – the minor miracle on the food front at my kitchen table! I decided to make this because I liked the sound of the apricots (!). Chicken flavoured with garam masala, aromatically spiced brown rice and lentils with dried apricots, flaked almonds and a minty cucumber raita.

My daughter isn’t that fond of chicken or spices, none of us particularly like lentils (except in soup). So as tea time was approaching and I was trying to think what else I could do with the ingredients, wondered if I’d go to the shops for something else to cook even. Fortunately, I got a grip on myself and made it anyway.

It was lovely, we all liked the lentils and little one said ”good chicken Mum.” I’ve been trying to hear those words for 10 years!!! Will definitely be making it again.


Next Up: Sally’s Baking Addiction

I've been absent from the blogging world for a while now, but hopefully I'm back now. There have been a variety of reasons I've not been blogging, and in the past few weeks, it's been because I cannot, no matter what I do, upload my own pictures to my draft posts. I'm thinking to do my pictures through my blog's Facebook page, so if you'd like to se them, do please 'like' on FB, see bar at the right hand side of the page.

I’m starting off with Save with Jamie by Jamie Oliver first published by Michael Joseph an imprint of Penguin Books in 2013.

The by-line of this book is ‘Shop Smart, Cook Clever, Waste Less’, and that pretty much sums it up. It’s important to say, I think, that this is a book for people who already spend money on food and cook themselves. It’s not a book about breadline cooking, it’s a book about good kitchen husbandry, well in my opinion anyhow.

Over the years I have wasted a lot of bits and pieces, and I’m not proud of that. It has taken me a number of years to stop stuffing my fridge with vegetables after the weekly shop, then see a number of them go rotten. I now buy my veg a couple of times a week and have less in the fridge at one time, which means I can really see what is there, and use it well. I’ve focused on vegetables here, as that is what I tended to waste.

Jamie’s book will help me too, he does a number of ‘Mothership’ recipes such as the roast beef below, then gives clever recipes to use up those leftovers, now or later if you freeze them. I say clever, because the leftover recipes are actually recipes that excite the palate, and food I’d want to eat. It’s not just me that’s fussy with leftovers is it?!

The book is nicely styled, laid back, but easy to follow recipes, bit of chat from Jamie, and fabulous photographs of the food from David Loftus. This book has a healthy nod too, and each recipe is calorie counted per portion, and at the back there are also lists in the Nutrition chapter for each dish including fat, saturates, carbs and sugar. There is a Shop Smart chapter followed by recipe chapters of Veg, Chicken, Beef, Pork, Lamb, Fish, and finally Bonus Recipes. There are a few sweet things to do with fruit at the back, but no other desserts.

Next on my to make list is Sicilian Squash & Chickpea Stew, Mothership Sunday Roast Chicken, Quick Chinese Wrap, Snake in the Hole (like toad in the hole), Pulled Pork Peppers, Easy Baked Risotto, Happy and Hearty Scotch Broth and Crispy Moroccan Lamb Pastilla. To name but a few. =)

I’ve made a few of the recipes so far, they have all been lovely and here they are:

Chicken and Chorizo Paella
Loved this one, it was my first make, and it makes a little go a long way, a low effort high delivery week night supper.

Jool’s Sweet Pea and Prawn Pasta Shells
Another quick good supper, I’m going to add a bit of half fat crème fraiche next time to have a bit more sauce.

Hit and Run Chicken
Not a looker this one, but again a really delicious supper

Smokin’ Turkey Chowder
Bit of smoked bacon, turkey (recipe said chicken, but I had turkey) sweetcorn. Happy days as the man himself would say.

Frenchie Salad
Leftover meat, French Puy lentils, French beans and a Dijon dressing. I added extra eggs here are I wasn’t sure how we’d like le lentils. Just as well I did as the miss flatly refused to eat them, she likes eggs though, so that was ok. I’d have liked the toppings over new potatoes better I think, but we are not big on lentils apparently.

Sweet and Sour Fish Balls
I did these with all prawns, as I can’t go squid. I also used plain scone crumbs for the balls the recipe withstood my changes no problem. Add a bit of sugar if you like it sweeter. First sweet and sour recipe where my miss ate the lot! Though the prawn balls were the star, fab little recipe! I did do rice as well, it’s just out of the picture here.

Roast Beef and the Trimmings
Mmmmmmmmmmm!! Need I say more?! Though of course I will. Will definitely do this one again, I used silverside, and it was lovely. We have rib of beef once a year, because it’s so expensive. This is a tender beef recipe that will let you have roast beef more often, but at less than a quarter of the price*. Hubby was very happy and I now have beef leftovers in the freezer, yay! *That is me comparing the price I paid for our last rib joint and this most recent silverside joint.

Looking forward to lots more tasty dinners from this one.