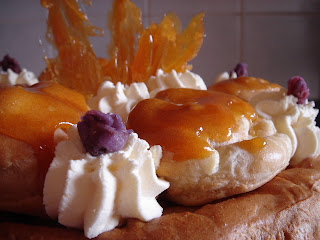 Gateau Saint Honore
I’ll start this post with a bit of background information. At the beginning of May I was asked to join the amazing Daring Bakers group. It a group for keen bakers, who are given a baking challenge every month. Everyone has the same challenge and our posts about the challenge are posted at the same time. The past two challenges have been red velvet cake in March and then last month a towering crepe stack with filling and glaze. 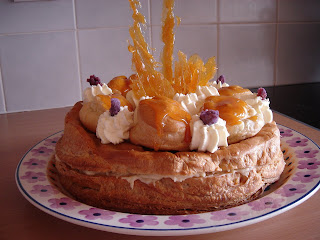 I have very much enjoyed reading the posts by other Daring Bakers. When I became a member and saw my first challenge: Gateau Saint Honore my heart did a couple of skips, as I realised what was entailed – home-made puff pastry, choux pastry, Saint Honore cream, caramel and also whipped cream. The only element I have not made before was the puff pastry, but I have had an unsatisfactory time with choux pastry. Sometimes it’s been great and other times it’s been flabby and awful; but being a daring baker is about baking something outside your own comfort zone, and taking on new challenges! 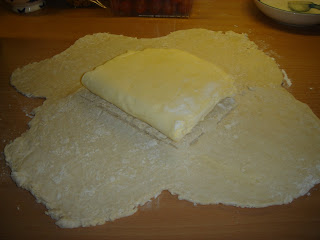 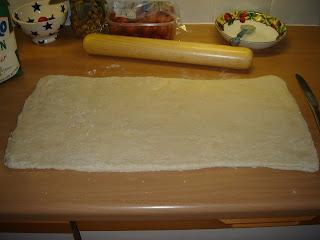 First pic, dough and butter packages before combining. Second pic, the dough after one of its many rollings.

The first part I made was the puff pastry, which was actually a piece of cake so to speak. I read the method I don’t know how many times before the picture of exactly what I was going to do became clear to me, but when it did it was really easy. You just have to make sure that you are at home for a few hours in one spell. You make a dough package and a butter package then combine them and roll out and fold, roll out and fold… with an hours rest in the fridge in between each rolling. The rolling seemed to get harder in the last couple of rolls - a real arm workout. I froze it after making it, to spread the workload a bit. 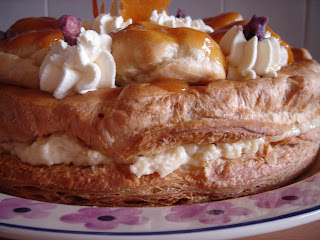 My Mum is in her 70s and during the course of this challenge I found out that she used to always make her puff pastry. The choice was make it yourself or do without. When I told her I was going to make it myself, oh yes she said, shop bought doesn’t even compare. Now I always thought she liked shop bought, and she does, but she is so right, make it yourself with good butter and you get something so full of buttery flavour it’s almost sweet. Is it worth making yourself? You bet it is. I have heard Sue Lawrence (one of the original Masterchef winners, and a fantastic baker) say the flavour is incomparable and this is absolutely true. 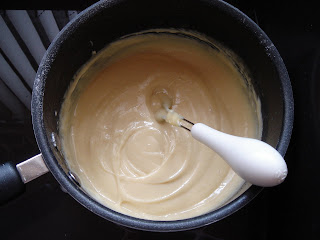 The creme cooling in a cold water bath in the sink, in case you wonder the stripes are the reflection of our kitchen blinds!

The day before I was ready to make the gateau itself it was time for the Saint Honore cream. This is also known as diplomat cream or rapid Crème Chiboust. Chiboust was the chef who first put together the gateau and the cream that fills it. St Honore (pronounced o–no-ray) is the patron saint of pastry chefs and bakers, his Saints Day is on 16th May. It’s a pastry cream or crème patesserie that is enriched with Italian meringue, which can be cooked or just whisked and folded into the cold cream at the end. It is also set with a little gelatine here, to give it more stability. This version has a little rum added in too. 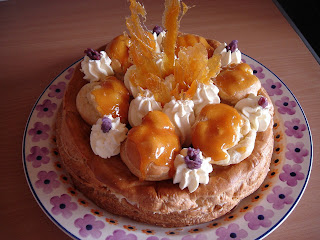 So the next day I had defrosted my homemade puff pastry, and had a ready and waiting bowl of pastry cream. I cut the puff pastry into a circle and left it in the fridge for a final rest before baking. Meanwhile the choux pastry was made. I started it off in the pan as usual, then cooled the initial dough before putting it into the Kitchen Aid and letting it do the beating while gradually adding in the eggs. Maybe it was my imagination, but I’m sure the machine left me with a lighter choux puff when they were baked. Although it might just have been because I was saved the huge amount of beating you need to do if adding the eggs in by hand beating! Anyhow, the mixture was piped into balls and in circles on top of the (uncooked) puff pastry. Then they were all baked, the puffs coming out first. 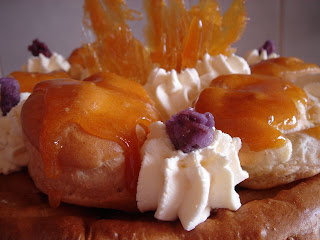 After cooking and cooling, the choux on top of the puff pastry was halved and filled with pastry cream, and the puffs were pierced and filled also. Next for the final touches, a caramel was made out of just sugar (no water added) which isn’t difficult, but it needs particular care as it caramelises more quickly. Once made the puffs were dipped, top down in the caramel, and also their bases were dipped in to attach or hook them onto the gateau. I was a bit blasé about the caramel and now sport a small blister on my finger as a result, because the sugar is hot hot hot! I also made a few caramel decorations for the middle of the cake. The very last things to do were to whip the cream, pipe it into the middle of the cake, and between the puffs, then finally decorate with a few crystalised violets and the sugar shards. 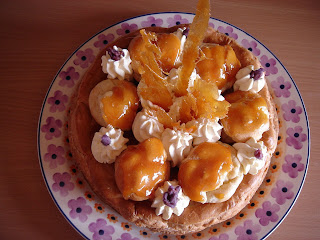 How did it taste? It was good! Made all the better by knowing that I had made it all myself. I made the puffs a little on the large side, so my gateau is larger than life as opposed to the dainty cake I thought it would be, but I’m very happy to have managed it! Thank you to Helene and Anita for being the hosts this month, and if you’d like to see some of the other Daring Bakers creations of the Gateau Saint Honore just click away on the links on the right under Daring Bakers. The recipe is here if you’d like to give it a go.

First challenge - thanks for having me DBs!

KJ, an amazing first DB challenge! You did a great job! I used the sugared violets too, they finish it off perfectly.
And you (and your mum) are both right - homemade puff pastry is so much better than bought!
Here's to next month!

Oh Kelly-Jane your write up is perfect and the Gateau is perfect.
Great job.
It is so neat to hear from your mum! Just about all things are better homemade!

That's very puffy puff pastry and puffs! If you don't mind I'll have just a little of that cream oozing out...!

Kelly-Jane - an awesome looking cake. You are right making your own puff pastry is so satisfying. Congrats on a fantastically completed challenge.

Way to go, Kelly-Jane! It looks amazing =) I'm so tickled you had a good first experience with the DB's, that's just wonderful =)

Beautiful...just beautiful. I made mine using store bought puff pastry and it didn't puff out :( your puff pastry looks really lovely!

You did a great job! Love yr mum's story, funny how our grandmothers and or mothers just seem to do a lot stuff we now see as "daring".

Wonderful work, KJ! I loved your post - you did a beautiful job on the challenge! I agree - the taste is made even better knowing it is your own homemade creation!

great work, I love your presentation. I´m with you, homemade puff pastry is way way better than store-bought, so I´ll definitely make it again for special ocassions.
Welcome to the DB!

Beautiful cake, I like the candied violets on top! I actually enjoyed making the puff pastry the most, it tasted so good.

Yours looks wonderful, love the violet additions! Think I'll pop up north and grab a slice :-)

Wow, wow, wow ... what a wonderful gateau and a great write up.

I remember my mother used to make her own puff pastry because, as you say, it was either that or none.

Congratulations! Your first DB under your belt and it looks like you rose to the challenge honourably. What a perfect looking dessert/cake. Great write up too as ever. Amanda x

Great write up. I am delighted you took the plunge and made the puf pastry. It changes thins radically. Great cake, and I love the candied violets!

Beautiful Kelly Jane. Store bought definitely does not compare to homemade. I love your sugar shards and the candied violets. Great touch!

Fantastic job on your first challenge!
I love the shards of caramel used to decorate...very cool.

Oh, wow! What a great job! Looks great and I´m happy you had such a successful start with the DB´s :)

Oh, brava!!! How beautiful it makes, and of course, I know it was absolutely delicious! Fantastic.

It's so pretty! Congratulations on your first DB challenge and I love the candied violets!

Wow, look how high that is! You did a wonderful job decorating it.

Your gateau is perfect. Well worth the sugar burn I hope. =)

You are so talented Kelly-jane. For a first challenge You did a wonderful job. Love the sugar violet on yours. It looks like a birthday cake.

Kelly-Jane, your step by step pictures are wonderful! A perfect picture guide to making that lovely cake. I also love the way you wove your Mom into your post. Great job on your first DB challenge!

How beautiful and for the very first time~

Wow! What a fantastic gateau for your first challenge. You can really see that making your own puff pastry yields a better cake. I love the candied violet garnish...very French. glad you are part of the DBs!

Kj, WOW!
I am amazed at how beautiful that looks.
I will eat my words about shop bought Vs home made puff pastry as I've never made my own....
Really, I'm in awe!!
Well done.
xx

OMG your pastry turned out so beautifully! Excellent job.

Kelly-Jane -- bravo! What a gorgeous gateau and what a great post. Love the caramel crown.

Kelly-Jane, you are such an inspiration. I want to try my hand at the homemade puff pastry so much now! Your post is fantastic, I love the cake and the step-by-step photos!

Congratulations. What an amazing Gateau St Honore. You must be really proud of yourself.

I love the photos of the puff pastry in progress. Gorgeous gateau - look at the beautiful sugar decoration in the middle!

Kelly, what a fabulous way of tackling your first challenge. congratulations!

Thanks for the welcome! Your May pastry looks yummy! When I get home I'm going to try and make it.

Another stunning one. Love the cream puffs and the lovely color of your cream.

The Daring Bakers are getting more and more daring! I love your version of the gateau.

Thank you for all your lovely comments. Can't wait to see what next months challenge is now :)

Wow! An amazing work of art you've created there as far as I'm concerned!! Stunning!

OMG, this is a masterpiece, Kelly-Jane!! Beautiful! I've had my eyes on this cake for a long time but never dared...

Oh Kelly...this is a fantastic DB debut! Congratulations... you did an amazing job!

Congratulations on a gorgeous gateau KJ. Your presentation is stunning... kind of a validictory post among a *very* gifted Zeta class!

Kelly-Jane - I am really very impressed. You handled the task so well and seem to have really kept your cool. The puff pastry really looks fabulous; it is beautifully golden and puffy. Great presentation - you should feel really proud. Did you save any for your readers?

This looks amazing - I am seriously in awe!