Instalment of 8 the Project from Nigella Express by Nigella Lawson. I wondered to myself if I must have been crazy giving myself this project, I know why I'm thinking this - because there are so many new cookbooks out or coming out just now, and they all need a bit of attention... Still I'm going to try and do 2 or 3 a week and hopefully fit in the time to blog about some of my other kitchen escapades, and it's coming up Birthday Season in our family, so a few cakes are in the offing too. I bought Southern Cakes - I can hardly wait to try some recipes from there. A couple of hours ago Bill Granger's new book Holiday arrived, fabulous pictures and good food, but more about sweet Bill in another post... 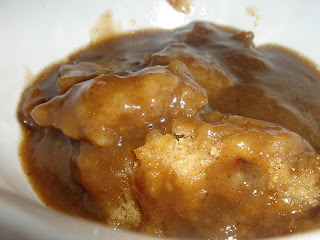 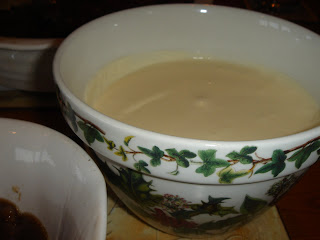 24 & 25 Holiday Hotcake with Eggnog Cream
This one is a spin on a miracle pudding, the one where you pour on boiling water at the end and it sinks down through the pudding to create a saucy base. This one was flavoured with the Christmas-sy spices of ginger and mixed spice. We adults liked it and the cream (a mix of whisked cream and Advocaat) was a great pairing for a December pudding.
It would be more in place in December, but I felt I had to give this one a go now, I think it was the name that lured me really! The spice-y toffee sauce and the more spice-y sponge was warming and comforting. If gingerbread is your thing (and it is mine) you’d probably like this one. I sweetened the eggnog cream with a big spoon of sugar before whipping, I even managed to use one of my Christmas time dishes to hold the cream in =) 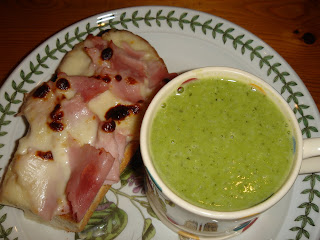 26 Pea and Pesto Soup
Water, frozen peas, spring onions, lime juice and pesto with seasonings. A real express soup, it was good, everybody liked it, but I had to add in some chicken bullion liquid to boost the flavour little. I have a favourite pea soup that I make, and this one didn’t top it, but it was still a nice soup. Great colour too. I’d be interested to hear what anyone else who makes this thinks, without the jaded mental image of another favourite to mar the taste!
I served a mug of soup here with a kind of croque monsieur, which wasn't a nigella recipe (Rachel Allen), so I won't discuss it here, but it was good! 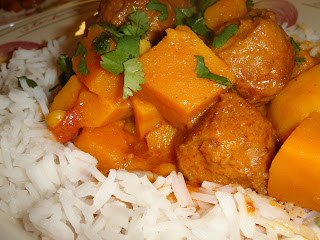 27 Mellow Meatballs
These are a real assembly job. The recipe has bought curry paste, meatballs and even included peeled and chopped butternut squash and sweet potatoes from the shops, but I chose to buy the vegetables and chop myself. When I read the recipe I wondered why nigella called them mellow meatballs, because there is 3 tablespoons of red thai curry paste in it, but all was soon revealed. It tastes (to me) like a speedy tagine recipe, although none of the ingredients point towards this, it is what it tastes like a mildly spiced tagine – but with no fruit. My friend Anna made this a little while ago, and said it was high in WW points, I’m trying to watch what I eat more and I found that with about a half cup of cooked white rice I could only just manage my sixth portion. It not so bad to have something hefty in the points / checks / calories department if it fills you up! – and we did like this, I made it for supper after a busy Sunday and it hit just the right spot. I was pleasantly surprised that it wasn’t too spicey or chilli hot, because I really thought three tablespoons of red paste was a fair amount, but it was fine, and I say this as someone who would never ever buy a hot hot hot fresh (or dried for that matter!) chilli.
Posted by Kelly-Jane at 08:59

I know what you mean about all of the cookbooks coming out - I'm only allowing myself one purchase a month, and it's killing me!!!

I know I don't have the discipline to make so many recipes from one cookbook without jumping around through my cookbook library! Hooray for you for sticking with this project.

Butternut squash with meatballs, huh? I have some squash lying around that's looking for a good home, and that sounds good!

These recipes all look great, but I'm especially drawn to the pudding and eggnog cream. It sounds perfect for any time that it is cold out. I love that the toffee sauce forms from water poured over the top. I have a chocolate pudding cake recipe like that.

oooh, I like the sound of the pudding. It does seem very Christmassy.

I really like Bill Granger's recipes. They are fairly straightforward and generally delicious.

The pudding sounds lovely KJ, I'll put it on my list of 'to do' recipes!

Ah, yes, the 64 point meatballs, I'm willing to give this recipe another try, I'm going to make the meatballs from turkey instead, halve the coconut milk amount, that should do the trick.
And as you say, it does fill you up definitely!
xx

i'll take the pea and pesto soup of them all. With a squeese of lime ! I'd seen her or maybe Jaime oliver make it on tele. Fell for it right away.

KJ, you are doing us such a great service with the project of yours and can't wait to see you tackle other books.

Through this series, we are enticed to get the books and also know that the recipes are tested and can be made at home. Thank you sincerely.

The soup looks great and the holiday hotcake - yes please. I'd have to add chilli to the meatballs.

Deborah, it's really bad! I've decided I'll have to break my 4 a month rule for Oct / Nov and Dec! There are just so many good new ones =)

Lydia, I know, I'm still cooking from other books too, I'll probably have to do a clearout of pics in a while!

Hello Nan!,squash or pumpkin in a curry / stew is a lovely addition.

Elle, the eggnog cream was grat, I added in a bit of sugar though as I wanted it a little sweeter.

Pat, butternut is so yummy at this time of year =)

Anna, I made the whole recipe bot have frozen a couple of portions, it feels good knowing this is in the freezer!

Kate, pea soup is a regular in our house =)

Cynthia, thank you, you are such a lovely lady!

Amanda, yes I think you might need a bit of extra oomph, it'll be " it was hot, but not as hot as Amanda's meatballs.." before you know it LOL!

Thanks for your lovely comments.

That soup! My husband "hates" peas. I just might not tell him. I'll bet he won't even notice. ; )

I think you have shown great restraint to stick with this one book for the duration of the project...and with all of the winning recipes you've shared, I think its definitely been a worthwhile endeavor. :-) Perhaps you will consider a Pastry Queen Christmas series of recipes in December?! :-)