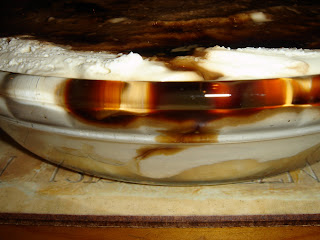 Having released myself from a high target of recipes from Nigella Express by Nigella Lawson, my enthusiasm for it has returned again, it’s funny how something enjoyable can become a chore if you feel you are duty bound to do it. Ah well I’m sure there is a life lesson to be learned there, but I want you to be thinking happy thoughts, so I’m not going down that road at the moment! 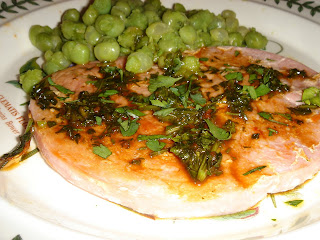 33. Gammon
This one was barely a recipe, but I’m glad it was there because it was the pan juices from frying the gammon mixed with a little honey, parsley and vinegar, and it lifted them into something really delicious. 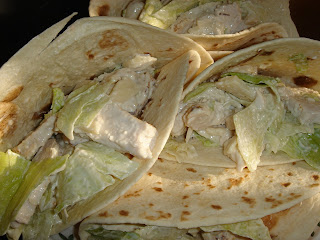 34. Ceaser Cornets
Unless you are vegetarian you have to give this a go, it’s simply cooked chicken and lettuce tossed with a kind-of-Ceaser dressing, and of course it’s really quick. It’s not so pretty to look at, but a definite deli delight. 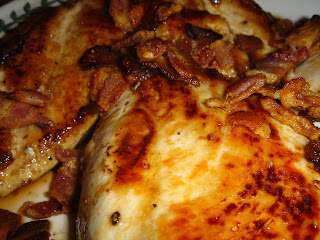 35. Chicken Snitzel
Skinless, boneless chicken breasts sauteed in the pan with bacon juices and wine. This was okay, we wanted a bit more juices or sauce. Cream would have probably helped, but I wanted this as a weeknight meal, when I don’t always want the extra calories …. 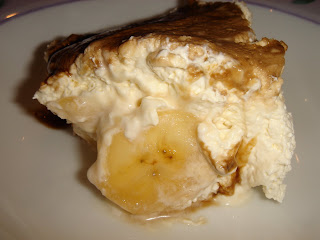 36. Caribbean Creams
Anyone who has made Nigella’s Barbados Cream from How To Eat will see where this recipe has evolved from, I like the Barbados cream so felt I had to give this one a go! Bananas, Malibu, coconut yoghurt and cream, with some sugar sprinkled over the top. It’s not a pretty pudding, and I think it could drop the Malibu, but I loved this. I had to search out the coconut yoghurt, but then I had to stop myself from eating it, it was just that good! It was lucky there was enough left for the pudding! 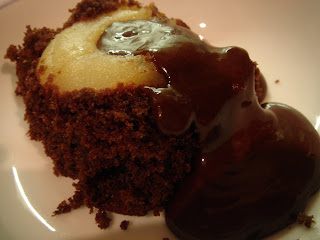 37. Chocolate & Pear Pudding
I made this one last night, and it went down a treat. Having a soft spot for tinned pears (and peaches too for that matter….) I did have this one marked, but after seeing Nigella make it on the TV series – it had to be made and soon. Our weather had been bucketing for a few days now, and we’d been out for a teddy bears picnic locally in the afternoon. This was just the pudding! It needs the chocolate sauce (I used the one from the introduction to the recipe) and also a slick of double cream, in my opinion! Even better, it made a big pudding, so there is some left for tonight! 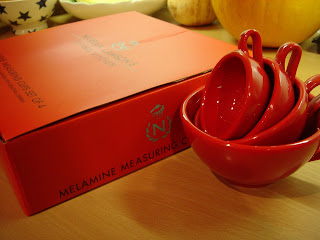 Also as an extra, being the Nigella fan I am I had to get a set of these for my Christmas time kitchen, Living Kitchen measuring cups in red melamine! They are incredibly red, and the box too.
Posted by Kelly-Jane at 08:12

You are incredible and you've been very busy. We do a chicken and lettuce thing with pizza express dressing but in pitta breads.
I love those measuring cups too.

Those measuring cups are AWESOME! I had to email Allan as he was such a fun of LK red. I don't think it's available in the US though, :(

How is it working with melamine?

The recipes look good! I want to try the chicken caesar cornets. :)

All your food looks amazing again, I especially love the chocolate pear tart.

I keep dipping in and out of NE some days I love it others I don't find it inspiring enough.

The LK cups in red look so beautiful I didn't realise they did melamine.

You are so right about things becoming a chore when you feel you have to do it!
Good on you though for seeing it through! I love the little caesar cornets and, yet again, I'm tempted to get the book!

I love those red measuring cups! I love the pear & choc dessert most. Can you believe that I still haven't gotten my act together to get Nigella's latest book? I can't call myself a true fan, I know... Maybe if I hint loudly enough to my friends, I might get it for Christmas! hee hee

Kelly-Jane ~ I think perhaps this is just too much of a good thing...it almost becomes predictable, and thus a chore. However, I am glad that you have renewed enthusiasm to complete your goal.

As for the very red melamine measuring cups, they're very cute. Is hubby building you a house for all your baking a cooking ware??

Great melamine cups KJ! I've always been wary of ordering the others in case they break!

All the food looks fantastic, and I know what you mean about it becoming a chore when you're under pressure to do recipes from one book.

Love your new red cups, KJ! They're such a nice treat.

I haven't made a thing yet from NE. I've been living vicariously through your efforts. :) Your food looks marvelous!

Kelly-Jane, I am ever amazed at your culinary output. I could never produce the amount and variety of dishes you prepare between posts. Chocolate and pear pudding sounds dreamy. And I'd love a set of those measuring cups; not only are they charming, but provide accurate measures with their clean edges.

Glad that you are back to having fun with Nigella! Sometimes I think that calling something a project makes it a bit of a chore. Now you can just have fun with it.

I'm intrigued by the Barbados cream. I've lived here for the a little over 9 years and never heard of it. Can you send me the recipe? Thanks a mil.

That chocolate and pear dessert sounds really good!
You are one busy cook :)

The red LK cups are lovely aren't they, and melamine is so much more practical.

All your food looks so yummy, but I have to say I'm with Vi, somedays NE is a good read, other days it just doesn't inspire - although your blog does :)

Well done! It all looks delicious. I'm so glad I get to start whipping up some of her fabulous recipes.

Amanda, pita is so good for sandwiches too isn't it?

Ilana, the melanine is good, it doesn't feel wrong after the pottery ones, it says they are dishwasher proof, but I'm washing by hand just in case!

Violets, I know what you mean, some days it just hits the spot, and others it doesn't!

Freya and Paul, There is a lot more in the book, then the series!

Nora, Christmas present sounds good! We all need a cookbook at Chirstmas time :)

Shaun, LOL I wouldn't start hubby on that one :) :) Ha ha! You are right about the predictability, it makes it a lot less fun, but hopefully I'm ok again....

Anna, the red is so bright and Christmas- sy :)

Susan, :) I've always liked Nigella's measuring cups, and have blue and lavender in the pottery ones. I wouldn't have managed to justify these, but being melamine they are only a fraction of the price - this is my new Christmas decoration this year, for the kitchen!

Lydia, that is just spot on!

Cynthia, I will email it to you (it might take me a day or two but I will!)

Kristen, it was good, the sauce made it more special :)

George, thank you :) I agree about NE, see my comment to Vi above.

Hi Kelly Jane, have been visiting for a while but not commented yet. I'm thoroughly enjoying your Nigella experiment! I tried the Holiday Hotcake last week and it was yummy - it's a bit frightening when you pour hot water over everything but nevertheless. It was quite strong on ginger but if you don't like ginger you could swap half of it for cinnamon. I am thinking about trying it in sticky-toffee style, with dates and mixed spice.

It's so nice to see someone else making her recipes, it's reassuring! I think I came here looking for a review of a Rachel Allen recipe but you obviously have the same taste in cookery books as I do. :-) Happy red-cup Christmas!

You have been busy indeed! It all looks so delicious though. I wish this was the menu for this month at our house.

An interesting read again Kelly. Where did you manage to locate the coconut yogurt?

I'm desperate for someone to give me the recipe for Barbados Cream - I wrote it down watching Nigella on TV, made it - was FANTASTIC - then lost it. I know its greek yoghurt and cream, but its the exact type of sugar that I'm not sure about. Second time I made it it wasn't as successful as I used the wrong type and it didn't 'melt' down through the yoghurt/cream mix. If anyone in the WORLD can help I would be so happpy!