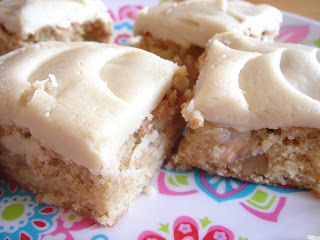 I saw these blondies on a blog, and just had to buy the book… It’s an Canadian baking book called Bars & Squares by Jill Snider. This book is choc-a-bloc with delicious sounding and great looking baked goods, like blueberry cheesecake bars, coconut chocolate caramel squares and amazing Amaretto brownies.
It was really the frosting that had propelled me kitchen ward, but after I made them it was the fabulous apple blondies that were the star. The frosting gilded the lily, but the brownies could easily stand alone, the apple-y taste was just wonderful! They were even better second day, the frosting settled down and blended with the blondies better, well in my view anyway =)
Thank you to Maria of The Goddesses Kitchen for making the blondies first - see here - and putting me in touch with a new book!
My notes are that I just sifted the icing sugar straight into the pan, see method and I got 24 good sized squares.
Apple Blondies with Brown Sugar Frosting
From Bars & Squares by Jill Snider
Blondies:
2/3 cup butter, softened
2 cups brown sugar, packed
2 eggs
1 teaspoon vanilla
2 cups all purpose flour
2 teaspoons baking powder
Pinch salt
1 cup peeled chopped apples
3/4 cup chopped walnuts
Brown Sugar Frosting:
4 oz ½ cup butter
1 cup brown sugar, packed
¼ cup milk
2 cups icing (confectioner's) sugar, sifted
Blondies:
Lina a 13 x 9 inch baking tin with baking parchment. Set oven to180oC / 350oF.
In a large bowl, using an electric mixer on medium speed, beat butter, brown sugar, eggs and vanilla until thick and smooth, about 3 minutes. Combine flour, baking powder and salt. Add to butter mixture on low speed, mixing until blended. Stir in apples and nuts, mixing well. Spread evenly in the prepared tin and bake until set and golden, 25-30 minutes. Let cool completely in pan on rack.
Brown Sugar Frosting:
In a small saucepan over low heat, melt butter. Stir in brown sugar and milk. Bring mixture just to a boil then remove from heat and let cool to lukewarm. Sift in the confectioner's sugar, mixing until smooth. Spread evenly over bar. Let stand until frosting is firm enough to cut. Cut into bars or squares.
Posted by Kelly-Jane at 06:20

These sound great - and it sounds like another cookbook I'd love!

I have never tried blondies, Kelly-Jane, and these are so wonderful!

Those sound sooo incredibly good. May have to try them this weekend, before my chocoholic Hubby returns :)

I might have to get that book. All the ones you listed and the one you made look and sound yummy.

Those blondies look lovely, think they could be on the menu for the weekend!

I've never heard of an apple blondie -- what a great idea! I love the color, too.

Will have to give these a try.
They look very yummy indeed. Have printed it off.
Thank you K-J.

I have never tried blondies. The apple flavouring sounds great.

Oh, boy! My husband, the apple aficionado, would adore these. Great idea to put fruit in brownies...uh, I mean blondies. : )

Yum, they look so good. Another recipe I will have to try! (and another book to go on the amazon wishlist!) :)

You did such a great job with these. If Maria made them before I trust them to be totally delicious.

I love blondies and these sound absolutely delcious.

I understand how those bars could make you buy a book, they look great!

Wow, everything about this looks incredible! Must try these asap :)

These look so moist and delicious. No wonder you had to make some after seeing them.

Nora
p.s: did I ever tell you that I finally got Nigella express. It was a gift last Christmas. I've made several things from it, love it! Thanks for introducing me to the book.

They sound amazing. I must try these!

Kelly-jane - I have tagged you, check out my blog for details.

Not to be an annoying know-it-all, but Jill Snider is actually a Canadian cookbook author. She has written a few cookbooks and used to work for Robin Hood Flour company.

I'm glad her recipes appeal to an international audience!

Your Apple Blondies came out perfect!! Thanks for the mention ;o)

These sound like the perfect combination. Apples and brown sugar. So yummy! Sounds like I need to add to my cookbook collection too!

The apple blondies look wonderful. I have never made or even tried blondies before.

We'd like to invite you to participate in our July berry recipe contest. All competitors will be placed on our blogroll, and the winner will receive a fun prize! Please email me, sophiekiblogger@gmail.com, if you're interested. Feel free to check out our blog for more details. (Click on my name in the message to visit our blog. :)

I've only heard of but never had blondies.

Sounds wonderful, like the perfect treat to accompany a cup of black tea. :)

Thank you all for your comments :)

Dana, thank you I did wonder, and have amended my post!

Sophie, thank you for your inviation, I'm sorry I won't be able to take you up on it - I'm going to have to take some time away from blogging for a while.

Ooh, ooh, I must make those! They look so tasty! Thanks for posting the recipe.

Those look so perfect! I love blondies and am always trying new combinations!

I'm Haley, Key Ingredient's Chief Blogger. We would like to feature this recipe and photo on our blog. We realize it is taken from another source, but we'll be sure to note that...we just feel you've done a great job putting this meal together! Please email haleyglasco@gmail.com if interested. Thanks :)