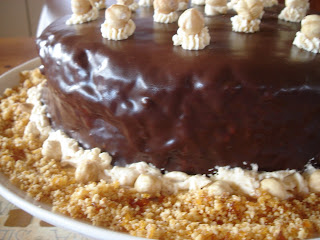 I used some of the leftover praline to decorate the plate
It’s that time of month again - Daring Baker time. This month sees a challenge set by the lovely Chris of Melle Cote. It’s a mutli layered cake with seven different parts, making up the one big gateau. It hails from Great Cakes by Carol Walter, a book full of, well great cakes! 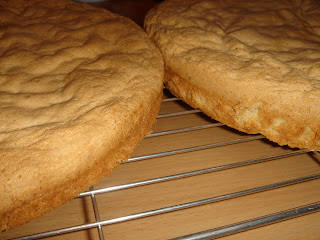 The cakes
The various elements of the hazelnut gateau were a Filbert Genoise – light and airy hazelnut sponge, a Sugar Syrup for soaking the sponge, Praline Buttercream for which you needed to combine a Swiss Buttercream and a Praline Paste, finally there was an Apricot Glaze and a Ganache Glaze to finish it all off. 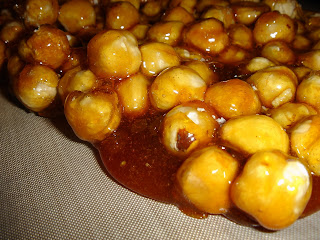 Hazelnuts and caramel, ready to be ground
I usually multi task quite efficiently, but this time blips were coming at me think and fast. I take full responsibility, I guess it’s possible my brain might just be in overload currently. 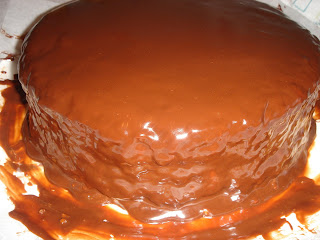 The cake in it's dinner jacket of chocolate
First there was the sugar syrup, which I didn’t read correctly and instead of ¼ cup of sugar and 1 cup of water I used 1 cup sugar and ¼ cup water. It was close to being soft ball in consistency, and I melted my favourite plastic measuring spoon. I would add that I moulded it back the best I could, seeing as it was so floppy, and it’s worked a bit, but it will never be quite the same again, what a silly goose I am. Never mind I made a new batch with the correct measurements. Next I layered the cakes with the praline buttercream and when I got to the top realise that the sugar syrup with rum added was still in the fridge. I remedied it the best I could by placing the cake on a serving stand with a lip and dousing the top then placing spoonfulls of the syrup on the stand and tilting it until the syrup disappeared into the sponge. The third and final mishap was when I was piping the buttercream onto the top of the cake, when my piping bag burst on top of the shiny chocolate! I thought well the top won’t be quite what it was but I get a plastic food bag and use that, it burst too, so I just blobbed on little dollops and also round the base of the cake. When I cleaned the nozzle I found a bit a praline the bad been to big, blocked to nozzle and had therefore made the bag burst.
I’m actually feeling quite lucky that it turned out even halfway decent, I guess the moral of this story is don’t attempt too much if you are overloaded already! It was fun though, and the cake was good, even better with some double cream on the side. 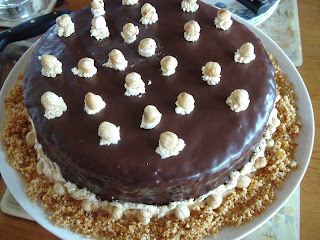 A really messy cake! I just couldn't recover the spodged on top!!
Thanks Chris for a great challenge. Visit the Daring Baker Blogroll to see some more great filbert cakes.
Posted by Kelly-Jane at 09:10

Dear Kelly
First time on your blog....loved your posts and this cake is quite well done...
Greetings to you from Botswana !

I think even when not overloaded this cake can get complicated. :)
Yours turned out lovely and I love what you did with the extra praline.

This cake had me in a tizz too, lol. Yours looks lovely though, love the praline decoration!

Despite the mishaps, it turned out great. Good on you for sticking with it.

Even with exploding pastry bags and the incredibly time consuming construction, the cake looks lovely!

I forgot to use the syrup on one of my cakes too. Too many things to remember! Yours looks great!

Your cake looks just lovely! Its the end result that counts, we've all had our share of mess ups but the secret is not to tell anyone!! :)

cake looks great, i like the nuts on the outside.

That looks great. I'm always impressed by the efforts of the daring bakers but yet to pluck up enough courage to join, maybe now that life has calmed down I should give it a shot.

One would never know you'd had any issues at all! beautiful cake!

despite the probs, I think your cake looks nice. And, I loved the tone of your post.

Another beautiful version of this cake -- you really are daring!

That extra praline did a wonderful job of nesting the whole cake - beautiful. Job well done!

I'm another one thinking the only reason I know you had a problem was because you told us:) The finished product looks incredible and I am sure it tasted scrumptious:) You're sooo clever K-J:D

I had the same problems with nuts in the icing tips, and it was a pain.
Beautiful cake, nice decorating.

I think you recovered quite well!! I think it looks great!

I have a question: How did you not eat all the praline before decorating the cake with it? ;)

Me again KJ, you have an award waiting on my blog.

Wow oh wow Kelly your cake is magnificent, you one talented lady!

Lovely cake even if not all the parts went together in an unconventional manner. Great job for being overloaded. Love the nut decorations.

Hi KJ great to be back and viewing all your scrummy creations. OMG that Gateau looks stunning - well done on a great bake!!

Another wonderful challenge that you took on.
The cake looks delicious.

Well done, Kelly Jane!! I'm no longer a DB (had to pull out), so I am enjoying the challenges vicariously ;-)

Thank you all for your comments, and an extra thank you to George for your award!