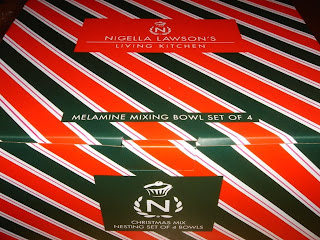 Here is the next instalment of my cooking from Nigella Christmas by Nigella Lawson. Now that Christmas is much nearner, indeed December is nearly here, reading Nigella Christmas is such a joy, not just for the recipes either, the pictures too, of both food and serving / kitchen bits and pieces. I’ve bought a few new bits of Christmas crockery recently, and will cover them all between now and Christmas, here are the first couple though. 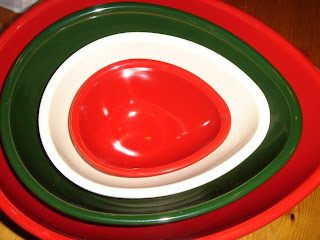 Nigella’s Christmas mixing bowls in melamine. I wasn’t sure about the melamine reading about it online, but it’s actually every bit as good as it’s pottery counterparts. I imagined the melamine would be light, but it’s not, it’s substantial and also has a rubber (?) bit on the base to make them non-slip on a kitchen worktop. They are great in the different colours in each set as well. 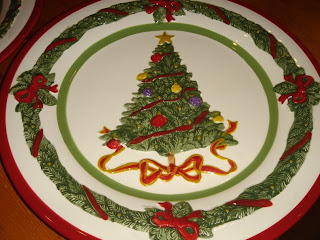 Next is a Maxwell Williams round platter, a local kitchen shop to me had these on sale for half price, so it was only £8.oo – bargain I thought! 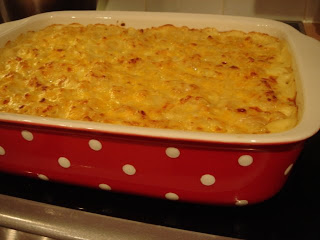 De Luxe Macaroni
Food wise I’ve made a hodge-pode assortment of recipes! Starting off with De Luxe Macaroni, I made a bit of a booboo with this one, because I halved the recipe, but left the cheddar at the full amount. I obviously didn’t plan this but we loved how cheesy it was with the (in effect) extra cheese and will leave it as such next time. If you are worried about the evaporated milk in the recipe don’t be, my hubby doesn’t like evap milk, but he had thirds! 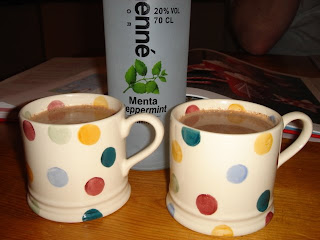 Hot Scnocolate
Hot scnocolate next, very yummy and I made this on a day last weekend when we had snow, and it was delicious, the peppermint schnapps was pretty subtle in the drink, not very boozy tasting, but nicely minty. 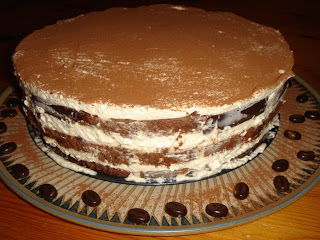 Tiramisu Layer Cake next, a real party piece, creamy, chocolate-y and a bit of coffee, but it wasn’t overpowering - a good balance we thought. Next time I’ll decorate it with the chocolate coffee beans on top. 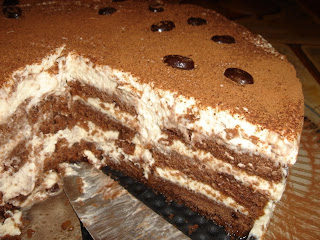 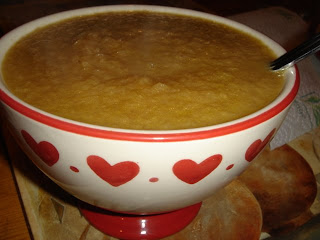 Apple and Onion Gravy
I did roast pork last weekend, and tried ont Nigella’s apple and onion gravy to go with it, she describes it as a mixture between sauce and gravy, very good it was too. I reheated the leftover sauce to go with some butchers sausages – fabulous! 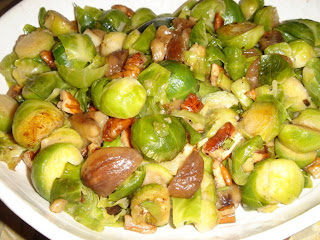 Pecan Sprouts, I make Christmas Sprouts from Feast as my regular Christmas Day ones, and I love them so much. The pecan sprouts were lovely too, although I did decrease the butter a bit!
Gingerbread, here spread with some butter, I’ve made this one before as Christmas gingerbread cupcakes, and it’s as good as ever. 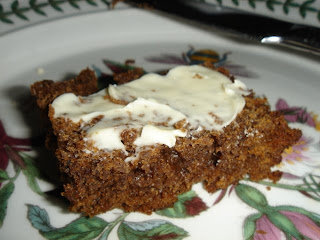 This morning I made the cranberry mincemeat (more on this next time) - our house smells so devine and Christmassy. Now time for some present wrapping…
Posted by Kelly-Jane at 06:07

Wow you have been so busy! I really want to make the tiramisu layer cake...infact I want to cook most of this book.
I love your new kitchen buys too, that plate is so pretty.

Love your Nigella bowls, didn't know she had a christmas range but I suppose it makes sense what with the book. I've been dying to make the Macaroni cheese, Tiramisu and Hot Scnocolate! They look great :-D xx

Kelly-Jane, I'm in love with your plate. So pretty. All your baking looks delicious.
Francesca x

Wow what delicious looking food! I absolutely love those bowls. They are definitely going on my christmas list! I've made the macaroni, isn't it tasty? I do like your plate, it's very pretty.

Scottie! Beam me over to Kelly-Jane's for this amazing meal!

Everything looks wonderful Kelly.
You are making me feel quite Christmassy now!

Wow, you have been busy! Isn't Nigella's Christmas just brilliant. Nothing better to get you in the spirit!

You make everything look so good K.J. The "Tiramisu Layer Cake" ~ another one on my list of to do's now. Love your Nigella bowls, your plate is so beautiful.

I really want to get those bowls as well and am planning on making some gingerbread for Christmas presents. All your dishes look great.

Your tiramisu looks better than Nigella's! I'm longing to make that macaroni cheese but cheese itself is so expensive here, perhaps I'll have to live vicariously through your blog :) And extra cheese is never a problem! Those bowls look gorgeous, melamine is so practical. Love the colours too :D

Oh my goodness!! I always love popping over here near Christmas! I love the red with white spots pot that has the macaroni in. xx

I wonder if you have something special planned for that ever-so-Christmassy platter? It's beautiful and so very festive:)

LOL I love the sound of the already decadent macaroni being made more so with a tad extra cheese - not a mistake at all! The mixing bowls look so festive, are you going to keep them for use only at Christmas though?

I'll take a boozy hot chocolate and some gingerbread please... you've been busy!

Kelly you never fail to have me drooling!! Everything looks so Christmassy and I love those bowls. I love Tiramisu, so definitely want to make that over Christmas.

I've also made the Cranberry Studded Mincemeat and isn't it just beautiful?

Oh lovely! Am loving your posts on Nigella Christmas. :) Next on my list is that gingerbread!

Mmmm! A wonderful posting Kelly. I think the gingerbread caught my eye though, it looks fabulous.

I recently came accross your blog and have been reading along. I thought I would leave my first comment. I don't know what to say except that I have enjoyed reading. Nice blog. I will keep visiting this blog very often.