When It’s Snowing Outside 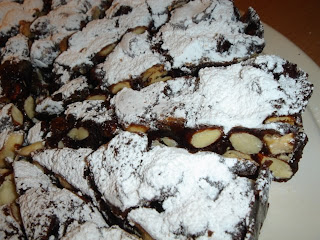 Panforte
Well, I am a Nigella fan, and although I (obviously) have many other cookery writers that I much admire and enjoy their recipes, it is first and foremost Nigella books that it feels comfortable to come back to read and cook from. Although I’m so looking forward to new ones from Bill Granger’s Feed Me Now and David Lebowitz’s Paris book and Martha Stewart’s Cupcakes in April, May and June respectively.
I’m far from done with Nigella Christmas, so much of it is just perfectly suited to the Winter and colder Spring months that it wouldn’t feel right to confine it to the bookshelf just because it’s not December anymore. So here are a few more bits and pieces that I’ve cooked recently from Nigella Christmas by Nigella Lawson. 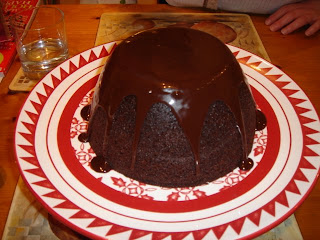 Chocolate Pudding for Christmas Pudding Haters with Hot Chocolate Sauce
A deeply comforting pudding with lots of good chocolate sauce. I made this as our pudding on Christmas Eve. 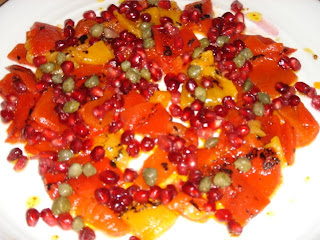 Chargrilled Peppers with Pomegranate
Fast to put together, especailly if you get your peppers from a jar or deli counter. I liked this one a lot, and it’s colours are gorgeously Bollywood and pretty. I think this would be a lovely buffet salad or even BBQ if you can get the pomagranate seeds then. 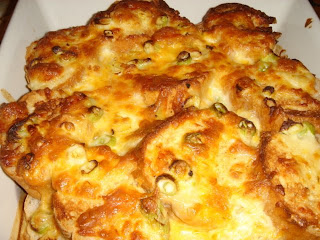 Triple Cheese and Onion Strata
A baked savoury sort of bread pudding. I think I put in too much baguette as mine was a bit dry I thought. I’ll need to play about with it; it was still all eaten though! 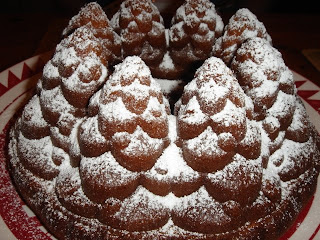 Spruced Up Vanilla Cake
I think of this one as fir tree cake, for obvious reasons. It was very cold and snowy last weekend when I made this, and it’s shape and the icing sugar snow was just beautiful. A sort of dense, but light cake with the strong aroma and taste of vanilla. 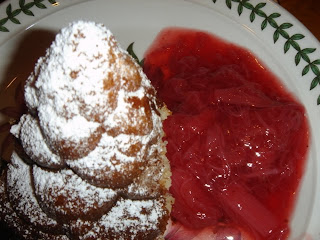 Rhubarb and Strawberry Compote
This is an unusual recipe, but very worth trying. It’s basically forced rhubarb simmered in strawberry jam. It works so well, there is still a faint tartness from the fruit, but the jam offsets it beautifully. It makes a lot of compote, so I used the rest for a rhubarb fool, which was so good. I make a fool of rhubarb that has fresh strawberries sliced into it in the Summertime, if you think the two together are a bit odd; give it a go – match made in Heaven. 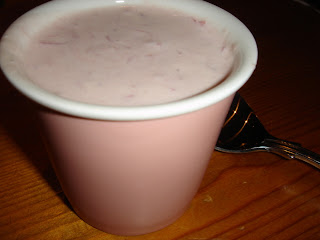 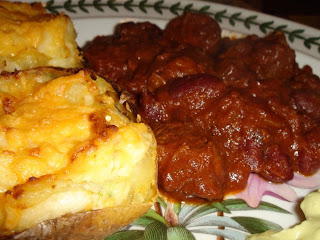 Choc Chip Chilli & Loaded Potato Skins
This is a good chilli. I halved the recipe, but it would be good for a party, the chunks of beef and chorizo makes a bit more of it. It’s spicy enough, but not too much for a chilli shy girl like me! It went really really well with the loaded potato skins suggested, I didn’t bother with the bacon, I have made them with the bacon, but I prefer them without. Great supper anyhow =) 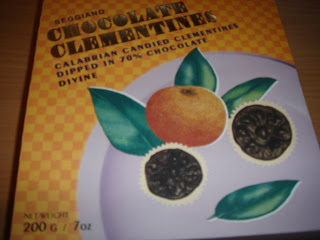 Chocolate Convered Clementines as used in 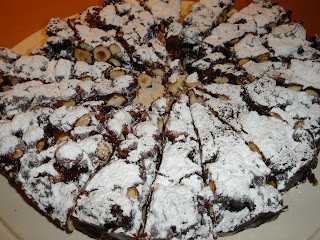 Panforte
I’ve had it in mind to make my own panforte for a number of years now. Really since I saw one of the River Café ladies making it on TV. I have that book, but haven’t gotten around to trying their one yet, but I hope to eventually. You know the problem, so many recipes and not enough time / energy. Anyhow Nigella’s is wonderful, many of the bought ones I’ve tried would nearly break your teeth, but not this one – fortunately! It’s chewy, nutty, fruity a little chocolatey and a lot spicy. I put in a very small pinch of white pepper as I was a little scared to use more. I also used some pistachios, as didn't have quite enough of one of the other nuts - I forget which one now. It would be beautiful at Christmas time on a platter, I’m not sure why it looks so good, but it does! 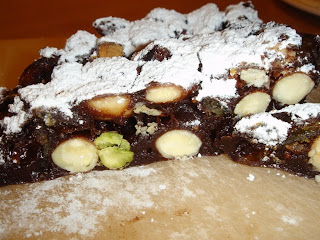 I made the Christmas Spiced Chocolate cake this morning, looking forward to dinner tonight =) More about that next time.
Posted by Kelly-Jane at 07:39

I want to live at your house!

You've cooked so much from NC! I'm a little unsure of the panforte, it does look very retty though.
I am still loving that spruce tin ...I think I'll be buying one for this Christmas.

Wow you really are a Nigella fan. I have cooked a few from the Christmas book but being back in Scotland for the holiday my cooking was somewhat redundant. I have been whiling away our long winter days reading through my cookbooks and this week I was pouring over Nigella's, I have all her books and I love them. You do her proud. You must be her no.1 fan.

K-J, you NEVER cease to impress me:D What a fabulous collection of dishes - a great variety and all lookings so beautiful. You always give me hints and tips for what *I* should do as I follow in your footsteps:)

PS, how DO you always know what's comming in cookbooks? I only seem to find out about them months after they're released...hehe and then I get to them a year or so later (ok, apart from Nigella:)).

Kelly I love these posts! Everything looks amazing and NC is a book to enjoy all year round, not just at Christmas. I love the look of the Chocolate Pudding, it looks really yummy.

I am not a chocolate lover but you have COMPLETELY sold me on the chocolate pudding!

About the book, use this link please: http://www.akdpress.com/viewtitle.php?value=D1109

I love Nigella's Christmas book and great to see so many delicious looking recomendations!

Everything looks so tasteful and delicious!

Kelly Jane, everything looks so good! Can I come & stay with you? :D

You have cooked so much from NC - I am so impressed! Panforte was on my present list but I didn't get round to it and I had planned to make the spiced choc cake for Christmas Eve but we ended up getting a takeaway instead!

K-J another great post and with a shows topping factor! I adore your spruced up vanilla cake and you have the mould. I agree N.C. can be used anytime of the year and such a great book!

I am really enjoying your posts.

It's great to see some of the Nigella recipes and encouraging to try some more myself!

Thank you all for your comments.

Coby, I have a real online habit!