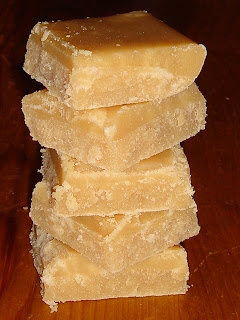 When I was little I have fond memories of my Mum making tablet. Ooooh scraping the pan when the tray was setting! Now for anyone who has not heard of tablet, it has nothing to do with anything a chemist might sell or dispense. It’s a sort of hard-ish fudge, totally addictive. I have heard and seen it sold at cake stalls as Swiss Milk Tablet as well just tablet, I can only think this is due to the condensed milk in the recipe. 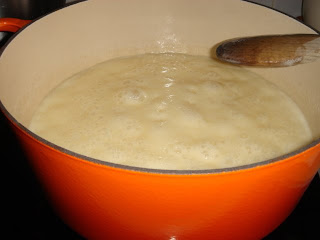 Newly on to boil
Now I started making tablet, fudge, toffee, boiling sweets and all manner of confectionery about 22 years ago. My maternal Grandfather made tablet for my Mum, she in turn made it for me, and now I make it for my family. It is something much like bread making – you get a feel for doing it, and learn to know what it should look like, at its various stages. The end result should be solid, but not rock hard, sugar-y but absolutely not gritty and a good fudge colour. 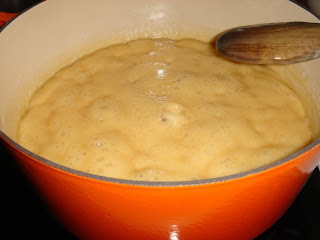 Half way through, getting darker
Last weekend one of my cyber cooking friends Sal, tried another friend Rita’s recipe for tablet. I had not made it for a few years, and it only took one look at Sal’s pictures to instil in me the burning desire to make tablet again, an hour later it was made. 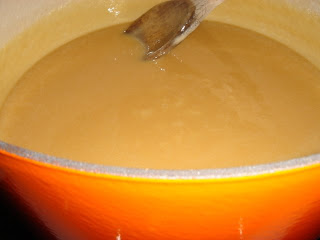 Perfect
I tried Rita’s recipe – thank you very much Rita, and it is a first class recipe. The vanilla extract is added at the beginning, and this gives it a fudgy taste with a fully rounded vanilla flavour coming through. This is not good for you teeth, but still I give it to you here highly recommended! 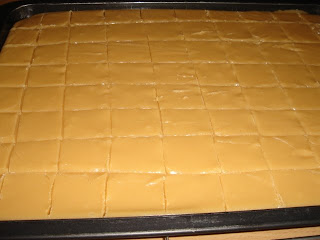 (1)First, grease an 8 inch by 10 inch Swiss Roll tray with butter. Have a glass of cold water waiting in the fridge.
(2)Put all the ingredients (except the condensed milk) in to a heavy based pan (I use my biggest Le Crueset), and melt really slowly until there are no grains of sugar left. Avoid stirring vigorously as you will push grains of sugar up the sides of your pan and end up with a gritty tablet.
(3)Once it has melted, add the tinned condensed milk, and take to a rolling boil. Boil for around 20 minutes, being very careful not to burn and / or boil over. Test a drop of the mixture in a glass of cold water. It should ball, not dissolve. If it dissolves, boil another few (3 to 5) minutes and test again. Once the soft ball stage has been achieved, take it off the heat.
(4) Now beat the mixture with a wooden spoon until it starts to thicken - you will feel it thicken as you beat. This takes a few minutes. Once thickened, pour in to your prepared tray, than leave to set. Mark it before it is totally set and cold. Will make for easier breaking / cutting later.
My Note: If you have never made this kind of thing before, please be warned that boiling sugar is extremely hot, and can give you a nasty burn. Due care and attention is needed at all stages!

I have never heard of this before. I wonder if anyone sells it anywhere around here as it sounds really good. Not sure I'm up to trying to make it myself.

As a Scot this is something I cook as a treat for my American friends here. Your recipe is very similar to mine. I'm working on macaroon bars at the minute. Hopefully Ill be blogging them soon.

This looks beautful! I remember seeing it in every single gift shop around Britain :) I do have a can of condensed milk kicking round, although I have a feeling I'd end up eating the whole lot of this stuff, it sounds delish!

Kelly, I've never had tablet but I know I would love this! Yummy.

This is pure wickedness :)

You have done that beautifully, step by step, well done.

I have never heard of tablet before Kelly-Jane. It looks and sounds wonderful.

I've heard of tablet but never tried it. It sounds sugary and delicious. I will definitely try it one day.

This looks wonderful. I'm going to have to make some myself soon now.


We bumped into your blog and we really liked it - great recipes YUM! YUM!.
We would like to add it to the Petitchef.com.

We would be delighted if you could add your blog to Petitchef so that our users can, as us,
enjoy your recipes.

Petitchef is a french based Cooking recipes Portal. Several hundred Blogs are already members
and benefit from their exposure on Petitchef.com.

To add your site to the Petitchef family you can use http://en.petitchef.com/?obj=front&action=site_ajout_form or just go to Petitchef.com and click on "Add your site"

We used to get toffee over here from Callard and Bowser, but I haven't seen it in years. This, of course, is so much better! So tempting, Kelly-Jane!

Oh this "Tablet" looks really gorgeous! I have heard so much about this but never made it "yet" watch this space :0)

Wow! What a recipe, I'd love to try it. It sounds creamy and delicious, bet it melts in the mouth too -- yum!

I'd love to try Scottish foods.. This one is really tasty too..

what a lovely blog! I just found it when I was searching for broccoli soup of all things! I love tablet, I get laughed at here for calling it that but that's just what it's always been!
xx

Thank you all for your comments =)

OH MY GOODNESS!!!!!! Ive tried loads to make tablet and failed but followed your simple recipe and guess what????? I passed, perfect!!!! Made loads of trick or treaters at my door very very happy tonight, thanxxxx so much, Claire, Scotland

Hi... I'm in Redding Calif. About 2 years ago my sisters and I spend some time in Scotland (the best vacation EVER) and we ate some Yum Yums. I've been looking for a recipe ever since then. Any ideas where I could find one? I'd love to make some for Christmas for my family. Thank You and Merry Christmas!!

hiya seen this on the bbc the other night and had to make it, not made this since i was at school everything has went well so far took a bit longer to get the ball effect but got there, just put it into the tin to set , and hope it tastes good , thankyou i really want to start baking , not good as iam on a diet xxxxxxxxxxxxxxx

Your site is amazing.I am very impressed to see this,i want to come back for visiting your site.Keep doing Good as well as you can..

I never had tablet before or heard about this before, this is a first for me. It's looks wonderful, and easy to make, this I got to try, thanks for the recipe. wish me luck :) This is my first visit to your blog, I stumbled upon it on the web, and I like it.

Thank you, you have been most helpful.

hmmmmmmmmmm.. im drooling just looking at the picture.. can i have one bite. hehehe and i never baked like this before.. ^_^

thanks for this..made it today amazing, just like my granny used to make when we were little.

I just saw this lovely receipe and will be making it tomorrow and using the family as my guinea pigs! Stay tuned....

Ok, just made it...(drumroll please)... and was a complete success! Ran to the shop, grabbed my ingredients, got home, went to work, and am now sitting down taste testing with the kids who have declared it a keeper! This was oh so simple to make, a little time consuming but defenitely worth the effort, and the results speak for themselves. Slightly sugary on the outside and then a totally melt in your mouth experience on the inside! Thanks for the fabulous recipe xx

Really glad it worked out :) I quite need some myself now....

I am Scottish and I was brought up on this very same recipe. I am now in my 60's and remember my dad making this for us as children and I also made it for my children, one of them is now married and living in Japan and he is now making it for his family....if anyone reading this still hasn't tried this wonderful recipe you are missing out on a great experience for your tastebuds!

Hi Kelly-Jane, just had a browse through the recipe's on your site. Like you I am in Aberdeenshire (Banchory) & love to cook!!! Nice site & fab receipe's being shared by yourself, keep it up!! XX Tracey

Crafty Eileen, that is very true!
Tracey, hello and thank you! :)

OMG!! like a previous post , I had never even attempted to make tablet .... Till now that is :) thanks to your step by step tutorial it turned out perfect !! I'm Scottish born and bred and can now add tablet to my repertoire :) Thank you so much Kelly-Jane

Having tried to make tablet before and failing, I thought I would try again - this tablet was delicious and just like the stuff that you would buy at craft sales and wish you could make. I made mine with caster sugar and it worked perfectly. Many thanks.

Great recipe - just made some for Xmas pressies - of course i'll have to try it before I box it up! Thanks x

Hi! Thank you so much for sharing your thoughts. You have such a positive attitude that is really inspiring.

hi I have used this recipe for the last 4 years as my work do burns suppers and I must say its the best one I have found I also make macaroons and they both go down a treat. thank you a thankful scot

Boil 20 minutes? Is that correct?

On the part where it's on the 20 minutes, does this need constant stirring?

They look delicious, good Christmas treat for the kids! Will give it a try..

The recipe looks just like my Mama's Penuche fudge. Only difference is melting the sugar and adding the milk last. The color is beautiful. I'm going to try this. I'm Scots-Irish, German and a good measure of Ye Old English. I'm also pure American. And I cook everything from oriental, Mexican and good old hearty foods. Always looking for a new recipe to try. My husband is the healthy cook. Lots of salads and stir-frys.
Thank you so much for your recipe and tutorial.

Tablet is not the same thing as Penuche which is a brown sugar fudge. Tablet is so much better. I have made tablet for work and each time my Mexican co-workers say it isn’t tablet but Mexican milk fudge. Funny I hadn’t heard of Mexico when my auntie first made this for us in Scotland. Thank you for posting.

If you're English, they do it in larger branches of Thorntons, in bags called Dairy Butter Tablet. It's devine and very moreish x

I have a question. When you say condensed milk, do you mean plain or sweetened?

I have a similar recipe that was my great grandma Carma's recipe. She was full blooded native american. How did this happen. My grandma made this every christmas for the family. I'm blown away.

I, like Karen, above, want to know if it is evaporated milk you are using or the stuff called sweetened condensed milk? I am guessing it is the latter. Thanks!

Yes it’s the sweetened condensed milk, not evaporated, in this recipe 🙂