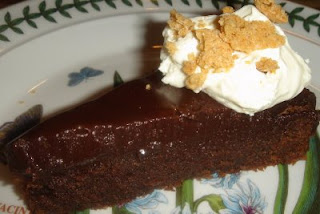 Moist gorgeous cake, deep chocolate glaze, almond cream and a sprinkling of Amaretti crumbs
Well, it’s been a funny sort of Summer. First before the schools broke up we had long spells of sunshine, and really, it was so horribly hot I was longing for a day trip to the North Pole, just to cool down a bit. This last weekend it’s tipped it down with rain like it was never going to stop, and it was actually cold with it. We British are rarely happy with the weather, and we do like a good moan about it. Particularly in Scoltand where 3 or 4 seasons of weather in one day is not unusual.
It’s made cooking a bit on the tricky side, who want’s light summery food when you are trying to keep the cold out of your bones, then you plan something comforting and it’s hot again. I’ve recently been re-reading Baking From My Home To Yours by Dorie Greenspan, and it’s lost none of it charm, just reading it can comfort. Dorie’s writing really appeals to me, because she is a very nice lady who loves to cook for her family and friends.
I’ve become and avid reader of Dorie Greenspan’s website and also David Lebovitz’s website and would recommend them both heartily. I do hope they don’t think I’m a weird internet girl who’s been at the whisky, I’m not; well I don’t think I am anyhow. My problem is I have lots of friends who like to eat, but no real foodies and it is so good to talk about food with other like minded food people - as well as cook it!
Anyhow, where I’m going with this is we had friends round at the weekend when it was wet and cold, and I cooked a roast chicken with Summery roast veg and gravy. For dessert I did the thing I almost never do. I cooked a pudding that I’ve not made before for the day. It was a Dorie recipe, but still that’s a risk I don’t usually feel happy taking, but for whatever reason I did it this time. It worked out a dream! I did 15 minute magic: Chocolate Amaretti Torte. I’ve made a couple of other ones before, one of Giada De Laurentiis’s and one of Rachel Allen’s, both of which were lovely. Dorie’s one is a flourless (if your Amaretti are flour free) and rich with almonds and chocolate. To top it off there is a chocolate glaze, followed by a gorgeous almond cream and a final flourish of Amaretti crumbs. A restaurant worthy dessert. In fact getting something this good when eating out is pretty unlikely. I’m giving it a post all to itself, because really it is so good, it deserves it!
You’ll find the recipe in Baking From My Home To Yours by Dorie Greenspan. If you do a search for it is ‘out there’ on the internet, as it was covered by the wonderful group Tuesday’s With Dorie, I’m not linking as I don’t know any of the bloggers who posted the recipe, but do search away!
Posted by Kelly-Jane at 09:33

Labels: Baking From My Home To Yours

I can so relate to that weather. Here I am making a humongos pan of chili, wearing boots... and tomorrow they say it's going to be hot again. Pfff!

We get four seasons in one day here in New Zealand too! Wouldn't mind a bit of summer weather though. That torte looks heavenly - like it has an amazing texture.

Great chocolate torte for the chocolate addict. It looks wonderful.

Hi...I've given you an award. See my blog for details : )
P.S. Your chocolate torte looks amazing!

Thanks for the thumbs up on this one KJ, I am having visitors next weekend so I might give this one a try! All my favourite flavours, almonds and chocolate, mmmmm!
Jeannette

Somehow this recipe has escaped me during my reads of Dories book .., how it could I really don't know as it looks and sounds so good.

Wow, this looks amazing! This would make for a wonderful dessert when you have guests over for dinner.

Hi Kelly Jane, I also love Dorie's recipes and this chocolate cake looks delicious! I totally agree with you about the funny weather, it has gone from one extreme to the other hasn't it? But then I suppose that's scottish weather for you. I heard there is going to be another heatwave next week, GROAN! :)

gosh, how good does that torte look. I love Dorie and David lebovitz too. I have never been disappointed with any of their recipes.

It's been way too long since I visited! How are you?

I hope that you're having a great summer!