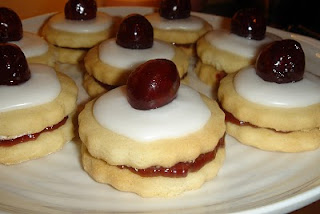 Well, Si King and Dave Myers aka the Hairy Bikers have a new book and TV series of the same name: Hairy Bikers’ Family Cookbook – Mums Know Best! The TV series started before the book was out, and it's a good one, Mums, families and their recipes, plus recipe fairs, it’s great to watch.
I’ve always been interested in other peoples’ food, and their family recipes, you know the ones that will pass from generation to generation. Si and Dave are the perfect pair to go on this journey of discovery, they have stuck to their guns and been true to the family recipes, instead of trying to jazz them up. I like that, something that was good fifty years ago should still be good now. Some are Dave and Si’s family recipes and some are from families that they have visited on the show. It’s not all British either, of course there are British recipes, but also from further afield, families from other countries, with different foods that are now cooked as family food here. I can’t wait to try Yasmeen’s Spinach, Carrot and Potato Pakoras, they look like the real deal, and so good.
The book is divided up into six chapters: Family Favourites, Show-off Food, Good Simple suppers, Birthday Treats, Sunday Dinner and Picnics. I’ve always liked the hairy bikers, and have enjoyed all their books, but this is the one I’ve cooked from. I’m enjoying the book a lot, and I was given it as a belated Christmas present from my own little one, she has been watching the programmes with me, and has been very interested herself!
Anyhow down to business, here’s the first batch of what I’ve been cooking from this book. I’m sure there will be a second post from this book in the future! 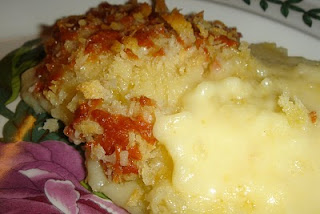 Cheese Pie
I couldn’t believe how much cheese was in this! It was soooo rich. It’s a good idea though, and since I made the one in the book I’ve brought life to leftover mash by adding some grated mature white cheddar cheese and baking it in the oven. I used considerably less cheese though! 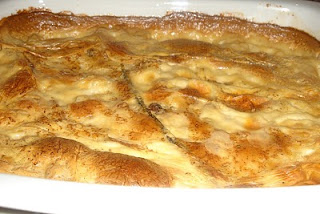 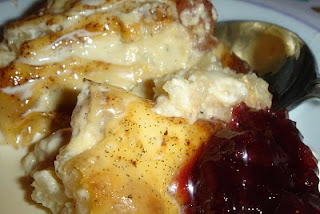 Traditional Rice Pudding
We as a family love rice pudding, and this one made a huge dish of it. It was good, although I’ll add a bit more sugar next time as I have a big sweet tooth! 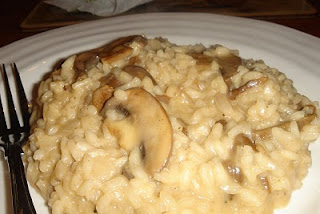 Mushroom Risotto
A milder mushroom risotto, where the chicken stock is paramount to the end result. Lovely. Cottage Pie with Cheesy Mash
This was gorgeous, just the thing for the cold January night I made it on. 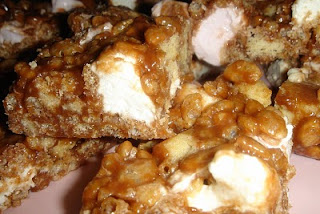 Rocky Road
These are not rocky road as I know them, but sort of mars bar crispies with crumbled shortbread and marshmallows added in for the bumpy effect. The shortbread was really good here, unexpected buttery, almost creaminess it added to the bars. Quite compulsive, I could have eaten a lot more than was good for me!
EDIT: I've made this a few times since, and now make it in a 7 inch aquare tin and top with 200g melted milk chocolate. 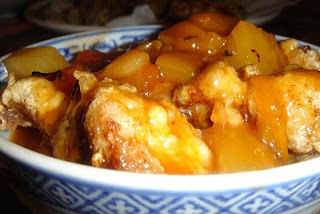 Sweet and Sour Pork Hong Kong Style
This was good, mine didn’t look like the picture in the book, but the pork was tender and the batter crispy, mmm. I added in some skinned peppers for a veggie element. 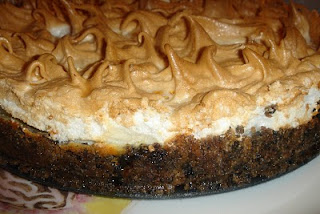 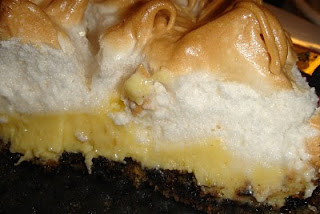 Key Lime Pie
We didn’t like this one that much, the filling was way too sour, the sweet base and meringue topping just couldn’t cope with the sour middle for us. 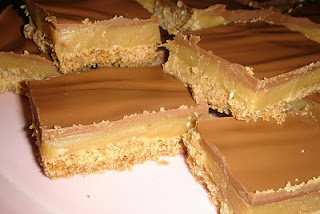 Millionaires Shortbread
A classic. I cooked the shortbread a bit too long, so it is darker than normal, but still very good. 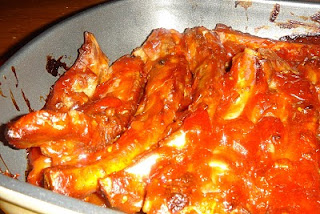 Pork BBQ Ribs
At last a BBQ sauce that doesn’t have chilli in it! These were lovely, I’ll try the sauce with chicken too. 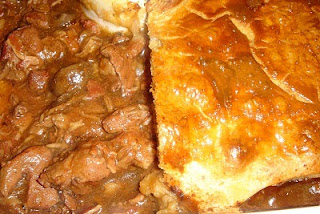 Steak and Ale Pie
This was really delicious. Loved by all. 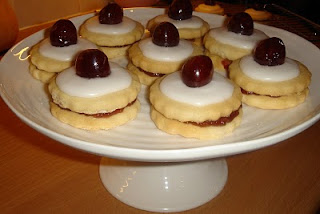 Empire Biscuits
I so wanted to make these the minute I saw the picture in the book. We used to have these when I was little, I know them as Sailors’ Hats. I’m not sure why they were called sailors hats though! Anyway they were beautiful little biscuits, both to look at and to eat, yum!
Here are the recipes for Rocky Road and Empire Biscuits in a link from the BBC (Scroll down).

I got this book too KJ not long ago, the recipes all look achievable, I'm so glad I got it!
I'm amazed you've made so much from it already (and it all looks good) well done you!

You have been busy! This all looks wonderful. I have really enjoyed the series too. I made the cheese pie, but halfed the cheese - or else it was a cholesterol festival :) but I loved the breadcrumbs on the on mash - yum. I must buy this book.

You have done well to make all of those wonderful recipes. Always nice to get a taster of the book from you.

Looks like everything turned out great - the empire biscuits look yum and I'll be making them myself this weekend! Si and Dave were at an event at my husband's work last week and he managed to get them to sign my copy of the book - I was so excited!

I've just discovered your blog so will have to catch up on all your previous posts as I'm addicted to cookbooks too.

I loved the idea of this series but unfortunately do not like the Hairy Bikers. I saw the first one and decided I really can't bear to watch them. So I now follow it on i player and can still enjoy the delicious recipes. Empire biscuits have always been a favourite of mine.

Everything looks so good KJ! I've been loving this HB show and I've resisted buying the book so far but I think I'm going to have to give in :-)

I also have the same book and I am lucky to have it because everything in it is so nice!

Baking and cooking up the usual storm, Kelly-Jane! Everything looks a treat. I keep circling back to that cheese pie! Yummy. : )

Hi Kelly
I've just ordered the book from amazon after viewing all the wonderful recipes you've made from the book. I've been watching the series too and really enjoying it.

You have an award waiting for you at my blog.

MMM, EVERYTHING LOOKS AMAZING! I feel particularly sorry for myself as I sit at my work desk and not get to have a taste of any of it. :) The risotti and pie looks delish!

Thank you all for your comments!

Thank you all for your comments!

My Kelly-Jane you have been busy. My copy of this book just arrived this morning and I can't wait to get stuck into cooking from it. Everything you have made looks delicious especially love the look of the cheesey pie. :-)

I love the chilli in this book. The lime in it takes the heat out.

I love this book. The cottage pie is in our regular rotation. It's SOOO good. And I've made the lemon drizzle cake as well. Very nice!