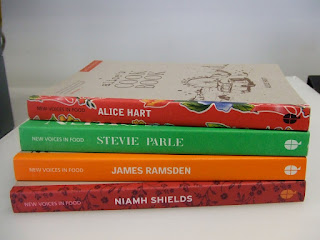 Image courtesy of the publisher.
New Voices in Food is a series published by Quadrille to give some very passionate foodies a voice in the cookbook foray. I have all four out so far, I bought three myself and thank you to the publishers for my copy of Real Food From Near and Far. I tend to think of them as a set of books, so I thought it’d be good to review them altogether. Though that said they would each stand alone, as they are all very different. The first two here were published in 2010 and the last two in 2011. They all have their own individuality and personality.

Alice’s Cook Book by Alice Hart.
Nicely done, clean layout, and done in an easy going calm way. Some pictures but not one of every dish by any means. Chapters are *Breakfast and Brunch,* Picnics, *Camper Vans and Happy Camping,* Seasonal Sunday Lunch* Supper and Munch to Share* and *Party*. I like how the chapters are done, for example the Seasonal Sunday Lunch chapter has four Sunday lunch menus to cook. Even if I don’t cook a whole menu together I like to see what an author would cook in real time for their family. The whole book feels like food Alice would make for her friends and family. 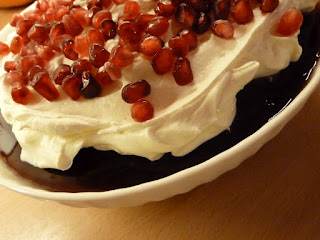 Some of the recipes I have earmarked to try are Oven Hash Browns (with bacon and egg), Caramelised Roots with Feta and Lemon Dressing to go with Slow Roasted Redcurrant Lamb, Chocolate and Salted Caramel Cups (oh my!), Very Garlicky Roast Chicken with Barley (pea and Mint) pilaf, Cherry Tart with Almond Pastry and a delicious sounding Melting Chocolate Cake. 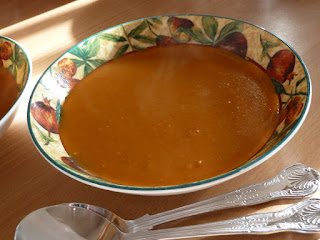 I’ve cooked three from this one: Pomegranate Jelly, Dahl Soup and Vietnamese Chicken and Sweet Potato Curry – no picture of the last one. All good, the jelly was my favourite, it you have this book do give it a go. Alice has a third cookbook out in May, her second with Quadrille, which I am very much anticipating and can’t wait to see! (between these she also had a vegetarian cook book out from a different publisher, which I plan to blog, so more about that one another time).

Real Food From Near and Far by Stevie Parle
Stevie’s background in food is as a chef. His food in the book is eclectic and far ranging. Not much in the way of British cooking, but some interesting food and cooking nonetheless. Stevie comes across as quite eccentric in his writing and choice of recipes – well I think so anyhow! Not that that is a criticism, I might be a little bit that way myself!! 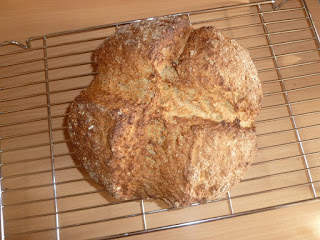 There are some pictures here hidden in the front and back flaps, also some artful line drawings. I do tend to think of this one as a single person or couples cook book, simply because mostly the food is not something you could serve up to a child in a family dinner situation. There are not very many meat recipes here, plenty of veggie ones though. There are 12 chapters, one for each month of the year. 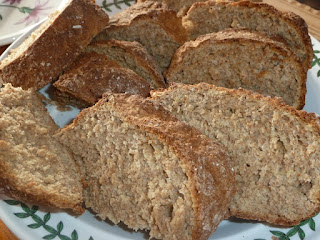 The recipe I chose to make here is one of the most pleasing in the book to me, a brown soda bread. I’m yeast free, so I’m always on the lookout for interesting soda breads, and this one is just a little out of the ordinary and well worth a go. Other recipes I like here are: Chocolate, Hazelnut, Brandy and Espresso Cake, Torta Della Nonna, Morel and Black Cumin Biriani and Klaicha an unusual but delicious sounding Iraqi pastry. Stevie has a second cook book out this year also from Quadrille.

James is a food writer and blogger. He has a straightforward attitude to food, and if there is a message to take from his book I think it would be a warm hearted and encouraging ‘Give it a go!!’ Not every dish is pictured, but nicely done. Chapters are: *Va va Voyages *Exploring the Cheaper Cuts * Corner Shop Capers * Morning Missions *Formal Forays *Feeding the Flocks * Preserves for the Pantry * and * Surfing the Stumbling Blocks*. 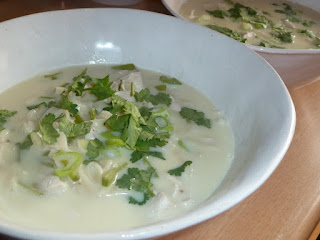 The recipe I made from this one was chicken and Coconut Noodle Soup, which was bright, fresh and delicious. Others I would like to try are: Roast Butternut Squash with Tallegio, walnuts and Honey, Smoked Sausage with Apples and Cream, Kedgeree, Potato Cakes with Black Pudding and A fried Egg, Roast Cod with Warm Russian Salad and Aioli, Pea Pilaf with Spiced Crispy Shallots and Almonds, Chocolate and Fennel Brownies plus finally a fab sounding Pork Wellington.

Comfort and Spice Recipes for Modern Living by Niamh Sheilds

This is the last of the four already published. Niamh is a blogger. It is really well named, her recipes are indeed comforting with plenty of spices throughout the book. They also have a real modern day edge to them. For example we all know and love chicken pie, Niamh’s one is Chicken and Chorizo Pie with tomatoes and a spicing of paprika with puff pastry, so a nice little modern spin of a pie we love. A more feminine book with patterns and materials here and there, again not every dish is pictured. Chapters are: *Brunch * Speedy Suppers* Long Weekend* Sugar and Spice * and *Drinks*. 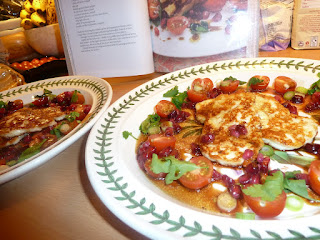 The recipe I tried was Halloumi and Pomegranate Salad. A warm fried halloumi cheese salad with onions, tomatoes pomegranate seeds and a punchy sweet / sour pomegranate molasses dressing that went with the cheese terrifically well. We had this as a light main course, but it would make a very nice first course too. Other recipes I’ve marked to try are: Lentil Soup with Harissa Croutons, Spiced Lamb Samosas, Beetroot Latkes and carrot and Beetroot Salad with Sesame Orange Dressing.

There is a fifth volume due out this year in May, it’s about wine - Drink Me How to Choose, taste and enjoy Wine.

Next Up: The Whole Hog

Never heard of this book, but the pictures the pictures look very inviting. I'm always hungry when I look on your post x

I've seen the series and its nice to see new and upcoming cooks, i'm a fan of Niamh from her blog, so its good to see her work in print.

The books all sound really intersting, but I have to admit that Niamh's book really appeals to me and the Halloumi & Pommegranate salad looks so fresh & delicious.

An interesting set of books you have reviewed and cooked from - I'll take a peek at these books when I am next out and about.

Sounds like an interesting book. I'm trying to be good and not buy any new ones at the moment. But you did a great job in reviewing this books! Maybe I would like to buy one already.