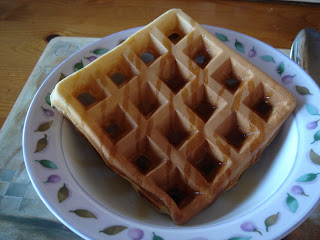 Double Vanilla Waffles - filled with Maple Syrup
I invested in a new kitchen gadget recently. I’ve worked myself up to getting it for a good while now, but I bought a new item related cookbook which helped me think I would use said gadget, and now it has arrived! My waffle maker. So of course I had to use it right away.
I had a quick look through Waffles From Morning to Midnight by Dorie Greenspan (1995) and made the first dessert recipe that I came to that I had the ingredients for in the house. Double Vanilla waffles, so called because they have vanilla bean and vanilla bean extract added into the batter, there was also some browned butter for an extra flavour dimension. There is a vanilla pear sauce in the book suggested as a topping, which would have made a lovely combination, but with our first waffles from the waffle machine we wanted just maple syrup. Ah, like the frozen toasted waffles I remember when I was a teenager – but 100 times better! They were fresh, light, soft, and deeply flavoured with the browned butter and vanilla.
I haven’t actually managed to read the whole book yet, but I’m sure there will be more waffles here, and I’ll give a list of some more of the recipes from it then. I’ve added the recipe for the waffles here, as this book is out of print.
Double Vanilla Waffles
1 ¾ (14 fl oz) cups Milk
½ large soft vanilla bean
5 tablespoons (2 ½ oz) butter
1 ¾ cups plain flour
2 teaspoons baking powder
pinch salt
1/3 cup sugar
2 large eggs
1 teaspoon vanilla extract
1 Pour the milk into a medium sized saucepan. Split the vanilla bean in half lengthwise and scrape out the black seeds into the milk, add the pod in too. Bring the milk to the boil and leave to infuse covered for at least an hour.
2. Place the butter in a small skillet over a medium heat. Cook until the butter melts and turns golden brown. It will give off a warm, nutty aroma. Take care not to let it burn.
3. Preheat your waffle iron.
4. In a large bowl, whisk together the flour, baking powder, salt and sugar to blend. Remove the vanilla pod from the milk and whisk in the browned butter, eggs and vanilla extract. Pour the liquid ingredients over the dry and whisk until just combined.
5. Spray or butter your grids of the waffle iron and cook according to the machine’s instructions. Cook in batches until the batter is finished.
Makes about 8 waffles.
Posted by Kelly-Jane at 13:40

Labels: Waffles From Morning to Midnight

Very nice! I live with a man obsessed with waffles.
How about a pic of your new toy? Do you eat them for breakfast or an afternoon treat?

I'll take a pic of the machine next waffle post. We ate them for dessert, but it was breakfast I was thinking of when I bought the book and maker.

A waffle maker! A gadget I don't have. I have only had waffles a handful of times, and only in France, but they were good. Yours look delicious!

Mmm. I had better not start investigating waffle books or makers, since our little house is already crammed with my kitchen stuff!!!

Oooh no please no more gadgets! We're gadget mad and have useless gadgets for everything, cooking or otherwise. Admittedly we also have some pretty good gadgets. Your waffles look delicious. I only like really freshly made warm waffles so what do you think - waffle maker definitely worth it or not? Can't believe I'm even asking this, tempted purely by your words and picture. I am a pig, disguised as a human!

I've been trying to find Dorie's waffle book! I love my waffle maker. And covering anything in maple syrup makes it good!

I used to make waffles quite often but have got out of the habit. Is your waffle machine electric? We had an electric one from the 50's but it died unfortunately, now I have a lovely old stovetop one in iron by the Norwegian company JØTUL. Mine makes a flower-shaped waffle with five "petals", yours looks more American to me, could that be?

Many thanks for the recipe, let's see if I can get back in the habit of making them at the weekends :)

Brilynn Hi! I bought my waffle book (new) on ebay.com - some great waffling recipes in there. I also got Dorie's Pancake book and it looks fantastic too. :)

Pi, I bought an electric Cuisinart Waffle Maker, will post a pic soon.

Ari, I know! I think I need to get all Dorie's books for my collection ;)

I love waffles, they are so good. I think I would be dabgerous to myself if I owned a waffle iron!

oh yes! waffle makers rule! i also got one a few months ago and i love it! yours look perfect!

I am going to have to try this these weekend. I just need to find a place that sells vanilla beans.

This book is a real keeper, I have made several of the recipes so far and they all turned out great. The Double Vanilla recipe is one of our favorites, along with White Chocolate Chip Waffles or the banana oatmeal variety.