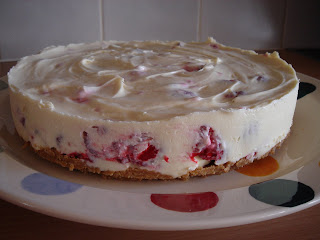 White Chocolate and Raspberry Cheesecake
This is another recipe from The People’s Cookbook TV programme. The lady who submitted this recipe honed it to perfection for her wedding day, where she made many cheesecakes for her guests desserts. When we saw the finished cheesecake on TV we just knew we had to give it a go. It didn’t win, but I really wanted it to!

One of our favourite cheesecakes is white chocolate and Baileys (my take on a John Tovey recipe), but it has a fair bit of Baileys and whisky in it, so I wouldn’t dream of giving it to little people! This raspberry one is very user friendly – uncooked and no raw eggs. Not that I have any issues with raw eggs, but I don’t have the courage of my convictions to the extent that I’m willing to serve them to any friends and family in the vulnerable groups. I’m drifting off though, this is a rich and delicious cheesecake, the raspberries seem to really pop with flavour against the creamy cheesecake, it reminded me taste wise of home made raspberry ripple ice cream. The colour of the raspberries suspended in the cheesecake mixture is so pretty too. The white chocolate is there and can be tasted - it was sweet but not too sweet. I think this would be a good BBQ pudding, and that's where I'll serve it next. 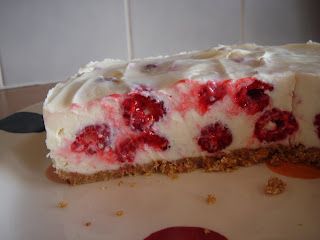 The recipe is a little vague, but I’ll tell you that I used 450g chocolate and a 250g box of raspberries. I did buy more to decorate or make a little sauce to go with the cheesecake, but unfortunately we demolished them earlier! The only place where I disagree with the recipe is that it says it would serve 6, I would have said 8, or even 10 if you have something substantial before hand - and I say this as someone who loves rich pudings! Here is the recipe:
http://uktv.co.uk/index.cfm/uktv/Food.recipe/aid/580382
Posted by Kelly-Jane at 00:07

Wow! This looks beautiful and completely delicious! Can you send me a slice?

Looks so impressive! I love those raspberries in full view. Very pretty.

Mmm! I saw this on the People's Cookbook and loved how it looked then too. I'm not a white choc fan but it looks soooo pretty. I'm with Freya - I want a slice please!

That looks yummy! Which is your recipe for Baileys & White Chocolate Cheesecake? I have a funny feeling that might be my favourite too! :)

This cake looks fantastic, Ilana's right, those raspberries look so wonderful against the white of the cake!

Jane here is a link for the baileys one - it's under my name on the recipe section of Nigella.com.

oh yum! anything with white chocolate always does it for me! looks awesome!

I saw that one too, it made my mouth water then and it is now. Will def give it a go and check out your Baileys one too. Amanda