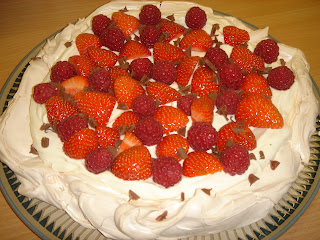 Pavlova
When the sun comes out and the berries ripen up it’s pavlova time! I love a good pav, as do all my nearest and dearest. I tend to make them only in the warmer months, probably because I like to make them with beautiful Summer berries. This pavlova comes from Butter Sugar Flour Eggs by Gale Gand.
A few miles from where we live there is raspberry farm and for the past three (or maybe 4) years they have sold their berries from a little porta cabin thing at the roadside. They are not particularly cheap, but I know I’m buying something picked the day I buy them and of premium quality, with only the miles between the farm and home as the distance the berries have travelled. As a bonus they sell bags of frozen berries as a reasonable price for making jam, and due to them having been consigned to the jam bags because they are too ripe to sell as ‘perfect’ shapely berries they and the jam they make taste wonderful. I also bought some Scottish strawberries as well, but not originating from as far north as us. 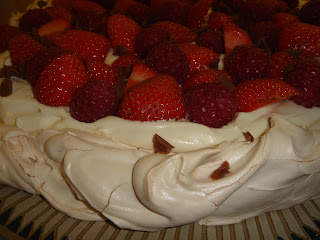 For quite a few years I made many different recipes for pavlova until I found this one. It really is (to my mind anyway) a four star pavlova. It’s secret and therefore Gale’s secret that she so kindly shares with us is to use raspberry vinegar. She calls it a "…subtle, almost ghostly raspberry flavour…" and that pretty much sums it up – it makes for a great flavoured pav, it doesn’t just taste sweet, there is a little more there in terms of flavour. I have changed the creamy topping only a little, giving a nod to Billy Granger in his Everyday book, and added in a small pot of low fat yoghurt. I did this because I wanted a bit more topping, but didn’t just want to add more cream. I think the mix of cream and yoghurt tastes richer than just cream alone, and it’s not quite so calorific – but I don’t think a pav is the time to worry about that one! Also you might be thinking does the cream need the soft brown sugar – it brings out the flavour of the cream, and if you think that sounds weird give it a go next time you whisk cream for a dessert. Here is the recipe if you would like to try it.
Pavlova
½ cup egg whites (4 fl oz) about 4 eggs
1/8 teaspoon cream of tartar
1/8 teaspoon salt
1 cup granulated sugar
1 ½ teaspoons cornflour
1 tablespoon raspberry vinegar
½ teaaspoon vanilla extract
10fl oz double (heavy) cream
2 tablespoons light brown sugar
5 fl oz pot of plain low fat yoghurt (my addition and optional)
Chocolate curls for sprinkling (also my addition and absolutely optional!)
Fruit for the topping
Heat the oven to 350. Whip the egg whites, cream of tartar and salt in a mixer fitter with a whisk attachment until foamy. Add the sugar, cornflour, vinegar and vanilla and continue to whisk until stiff, smooth and glossy (about 5 – 8 minutes more).
Draw a 9 inch circle on a piece of parchment paper and lay on a baking tray with the pencil marks down, but you should still be able to see the circle (or just go by eye). Spoon the egg whites onto the paper and smooth the sides and top with the back of a spoon. Bake in the oven for 10 minutes, then reduce the temperature to 300 and bake until the mringue has puffed up and cracked on the top and a light café au lait colour, about 45 minutes more. Turn off the oven and let the pav cool for 30 minutes still in the oven, but with the door ajar. Then cool on a rack (still on the paper and tray).
When cool peel away the paper and whip the cream and sugar until pretty stiff, then fold in the yoghurt, spread over the meringue and top with fruit. I like a sprinkle of chocolate as well, but it’s your call now!
Posted by Kelly-Jane at 00:50

KJ, you have tempted me into trying making a pavlova again.
The only time I made a pavlova it was Nigella's chocolate one, and I didn't cook it long enough, or let it cool down sufficiently.
it was a bit of a disaster.
A friend of my Mom's taught me the yoghurt and cram trick a few years ago, wonder if she likes Bill?? LOL

Kelly-Jane that sounds & looks yummy. Great post, love your trip to the local PYO portacabin and I prefer mixing yogurt with cream as I think it improves the flavour. I've cooked a few BG recipes this week. I think I may be getting a little crush on him... may have to continue with Australia for another week. Amanda

I confess that I have never made a pavlova, but this recipe looks so delicious, I will have to give it a try. What could be better than using berries from a farmstand right up the road? Sounds wonderful.

Never tried a Pavlova. Yours is just picture perfect and so are the strawberries.

Never tried pavlova too. It just looks to me like a big meringue. But I love berries. You are tempting me with this picture.

Wow that pavlova looks amazing. I wil definitely try the Bill trick next time I make one.

I, too, have never made a pavlova, but yours is tempting me!! My mother-in-law brought over a big bucket of strawberries picked from her garden yesterday, so now I think I know what I will do with some of them!

Kelly-Jane, your Pavlova looks gorgeous! It´s perfect. I have only made once but it kind of burnt o bit, it was all yellow-brownish.

I love pavlova and yours looks just perfect. I don't make it very often because it's hard to find top-quality fresh berries here ... too far south and not berry country at all! I do have strawberries in the garden and now we've just planted some raspberry canes. Fingers crossed they go well. We also have cape gooseberries so may try making another pav using those.

Anna, it's worth giving a go again - good luck!

Lydia, please let me know what you think if you give it a go.

Cheryl, give it a go!

Rose, that's right it's just a big meringue, but it's the way the cream sort of melds together with it mmm.

Deborah, I usually make this one with just strawberries, but I just couldn't pass up the loely raspberries.

Pi, I sort of imagined you'd have loads of berries in suny Spain! I hope your own ones flourish, and I love cape gooseberries too, yum.

About that mug - it's actually a cheapo "made in China" mug from a craft shop, lol. Leave me a comment on my blog with your email addy (I won't publish it!) if you want some and I can buy them and send them over!

Kelly-Jane - Being from pavlova country, I can truthfully say that yours is authentic because it includes vinegar, albeit of the raspberry variety (an interesting twist). I also love that you incorporated yoghurt into your topping. It sounds like your pav will keep many people guessing what its exact ingredients are. A beautiful job.

Those photos are mouth watering!

Kelly-Jane, your pavlova is wonderful! It's perfect!

Shaun, Thanks it means a lot that you think it's ok - as you would definately know :)

Kristen and Patricia, thank you!

I have been wanting to try making a Pavlova for a while, you just gave me a great recipe with tips.

Now I just have to find the time with having to make bagels for the DB too!

Beautiful Pavlova! I love the tip about the raspberry vinegar; I'll have to try that.

Looks absolutely delicious. Meringue is my favorite desserts. I used to pick up one at the pastry shop while getting bread for the family...Beautiful!

This is always the perfect summer dessert to me...light and refreshing.

This really does sound lovely. I've always wanted to make a pavlova, but haven't been sure about the merengue as it isn't one of my favorites. Since you've given it 4 stars, and it's beautiful, this would be where I should start.