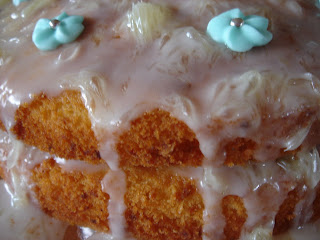 Here are couple more recipes from Delia, one with a minor tinker and one with a bigger one! I’ll do the savoury first.
Baked Cannelloni. I have always loved cannelloni, I’m not even sure exactly what its appeal is to me, but it’s got something! This recipe is Delia Smith’s from Delia's How To Cook Book 1, I didn’t buy either of the three How To Cook Books to learn how too cook, I bought them as many Delia fans here did to gain some new recipes from her. It’s a very comforting dish. It’s been quite chilly here for 6 out of the last 7 days, so when I did the shopping I thought it’d be ok to make something in the oven.
I’ve changed the meat filling mixture by using slices of chorizo instead of mortadella sausage slices, as the first time I made this dish this was what I used – I just couldn’t find mortadella. I have subsequently found it, but I really liked it with the chorizo, so left it as I’d made it. Also Delia uses 1 talespoon of chopped fresh sage in the meat mixture, and I dislike sage to the point that I just can’t eat something if there is sage in it, so I missed it out. Delia’s amazing trick that she passes on here is that instead of using dried cannelloni tubes, she uses fresh lasagne sheets that you cut in half and roll round little sausages of filling, genius! 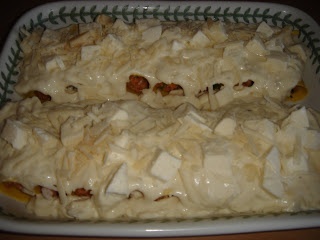 It’s not the quickest recipe, but it’s a good kitchen potter, which is cooking at its most enjoyable for me. You make a processor meat filling mixture which is also a meatball mixture from another recipe in the book. Halve lasagne sheets, make little sausages of meat and wrap the lasagne sheet around it. Next you make a bechamel sauce and grate and cube some cheese - Parmesan and mozzarella respectively. Pour the sauce over the waiting cannelloni fingers and sprinkle with the cheese and bake. I made up the filled pasta, sauce and prepared the cheese at lunch time then it was just a quick assembly and into the oven. Delicious, savoury, comforting, mmmmm. 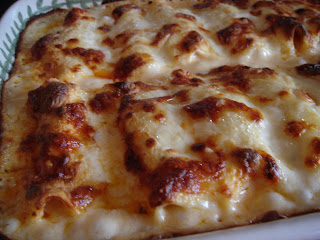 Baked Cannelloni
A variation of a recipe in Delia's How to Cook Book One by Delia Smith
8 fresh Lasagne sheets(weighing about 6oz/175g)
5oz (150g) Mozarella, diced
1 ½ oz (40g) Parmesan Cheese, finely grated
For the filling:
8 oz (225 g) minced pork
70g pack of sliced Chorizo
2 level tablespoons finely grated Parmesan
2 tablespoons chopped parsley 3 oz (75 g) white bread without crusts, soaked in 2 tablespoons milk
1 large egg
a little nutmeg
salt and pepper
For the béchamel sauce:
1 pint milk
2oz (50g butter)
1/1/4 oz (35g) plain flour
1 bay leaf
good grating nutmeg
2 ½ fl oz (65ml) double (heavy)cream
salt and pepper
You will also need a baking dish with a base measurement of 7 x 9 inches (18 x 23 cm), 2 inches (5 cm) deep, buttered. (mine is 9 x 12 and these is a bit of space left).
First make the filling: chop the chorizo slices in the processor then add in all the rest of the filling ingredients into the bowl of a food processor and blend everything on a low speed until thoroughly combined. If you don't have a processor, chop everything as finely as possible with a sharp knife and blend it with a fork. Wrap in clingfilm and chill for about 30 minutes to firm up.
Next make the sauce by placing the milk, butter, flour, bay leaf, nutmeg and seasonings into a medium-sized saucepan over a medium heat, then, whisking all the time, slowly bring it up to simmering point until the sauce has thickened. Then turn the heat down to its lowest setting and let the sauce simmer for about 5 minutes, then remove the bay leaf, stir in the cream, taste to check the seasoning, cover and leave aside.
Now pre-heat the oven to gas mark 4, 350°F (180°C), then cut the lasagne sheets in half so that you have 16 pieces. Next divide the meat mixture in half and then each half into 8, then lightly roll each of these into a sausage shape about 3 inches (7.5 cm) long. Place each one on to a piece of lasagne and roll it up, starting from one of the shorter edges. As you do this, arrange them in the baking dish with the join underneath – what you should have is two rows neatly fitting together lengthways in the dish. Now pour the sauce over and scatter the Mozzarella cubes here and there. Finally, scatter the Parmesan over the top and place the dish on the centre shelf of the oven to bake for 40 minutes, by which time it should be golden brown and bubbling. Then remove it from the oven and let it settle for about 10 minutes before serving. Finally, sprinkle a little extra Parmesan over. 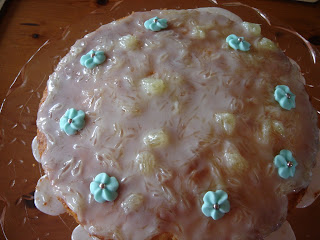 Coconut Lime Cake
This is a lovely summery cake, and comes from Delia Smith’s Summer Collection. It’s really fresh and zingy and the lime and coconut adds a different flavour to a cake often made with lemon (I’m not knocking a lemon cake – like them too!). There is lime in the cake and the filling, and both dessicated coconut and coconut milk power in the cake. My only very small tinker here is that I leave of the lime zest as a decoration (not keen on the texture), favouring some pretty summery icing flowers instead! It could be a cake to go with a cup of something or a pudding cake, it’s good both ways. 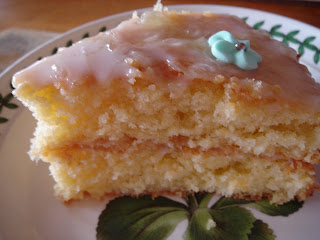 If you would like the recipe for the cake here is a link to it on Delia’s website: Coconut Lime Cake.
Posted by Kelly-Jane at 12:38

I love the idea of making your own canneloni with lasagna noodles. So cool! Your cake is beautiful and I especially admire the dainty flowers on top.

I, too, love the idea of the canneloni out of lasagna noodles!! I have made canneloni before, and it was very time consuming having to stuff the noodles, so this would be a perfect solution! The cake looks amazing as well.

Great post Kelly-Jane! Love the idea for the canneloni using the fresh lasagna and using chorizo instead of mortadella appeals. Cake looks amazing too. I need to go and cook dinner right now before I start snacking and ruin a days good work of not pigging out.

Wow what a lovely meal! The canneloni looks great - I've never tried to make it before and that cake. I love coconut and lime so it is one I will definitely be trying. I love your decoration.

I'm coming to your house! Yum, cannelloni and coconut cake.

What a neat trick with the noodles!
Both of these look excellent Kelly-Jane. Let's see I could bring salad . . .

These are both perfect. What a meal they would make. I am definitely trying the cake.

Kelly-Jane, both dishes look super yummy - I love the baked pasta, and the cake is so beautiful and looks incredibly tender!

I have been dreaming of making cannelloni with fresh lasagne sheets (now that I can get them here) but was thinking of a vegetarian version. Yours look fabulous and I bet very warming on a cold day.

Love the cake too, so pretty.

Your photos have me drooling! Looks delicious!

'You put the lime with the coconut and then you feel bettah' as the old song goes...great cake for summer and so pretty. The canneloni are mouthwatering, too.

Your canneloni and cake look wonderful! So funny, but I also make my canneloni that way! Much less fidgety! And guess what...I'm going to be making some canneloni today that way as well! I'll be using spelt lasagne sheets this time (just saw them last week and really wanted to try them), and I'll be filling them with a mixture of ricotta, soft goat's cheese and herbs. Yum! Can't wait!

I also love the sound of the cake. I think coconut and lime are a fantastic combination!

Both dishes look delicious, especially the cake. I've never heard of coconut milk powder before. I shall be keeping an eye out for it.

Two lovely Delia posts. With all this miserable weather we're having these hit the spot for cheering us all up!

My mouth is watering -- I could eat a lot of that delicious-looking canneloni!!
Your cake looks completely fluffy and perfect.

Oh my goodness! Both of those look so amazing, but I can almost taste how tender that cake is. It looks so wonderful!

Coconut and lime is such a wonderful combination. And I will never tire of any pasta dish. I made lobster mac and cheese yesterday and now you've got me wanting to make cannelloni.

Deborah, I've done stuffing the real cannelloni too, but it's a lot easier this way!

Amanda, thank you, dinner would be a good idea, you are doing well :)

Nora B, it's a neat little trick.

Elle, I only make it in summer, it just seems right.

KJ, it took me a while to find the coconut milk powder, but I found it in a health food shop.

Margaret, I'm having a Delia phase at the moment :)

Lisa, our little miss liked the cannelloni, Dad told her it was Gruffalo pancakes!