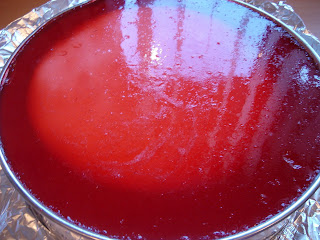 Still in it's tin, mirror mirror reflecting the window above.
.
Strawberry Mirror Cake
It’s that time of month again, and time to post about the July Daring Baker Challenge. This month it was a pretty pink cake called a strawberry mirror cake., a sponge cake with a set Bavarian strawberry cream and finished with a shiny ‘mirror’ on top. It is adapted from Cakes and Pastries At The Academy by the California Culinary Academy (1993). 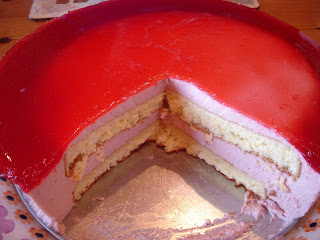 The cake comprised the sponge, which is a fat-less genoise style cake, which relies on the air beaten into eggs and sugar as it’s rising factor. It should have been baked in a wide Swiss roll tin (jelly roll pan), but I didn’t have the right size – 11 x 17 inch – I’ve got bigger and smaller buth not that one! The cake was to be baked in the tin, then 2 x 8 inch circles cut out once it has baked and cooled. I used 2 x 8 inch round tins instead, and used about two thirds of the batter, I used a bit too much, but more of this later… There is also a kirsch soaking syrup for the sponges. 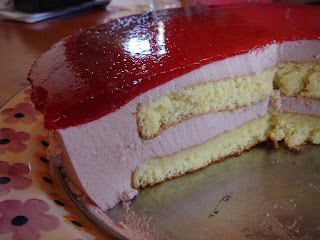 You can see the lower lip here, it's a small lip, but it's there!
The next stage was to make a sieved puree of strawberries to fold into a set cooked custard mixture, and then the whole lot is set with gelatin, the recipe said you could add a little red food colouring but I liked the pale pink natural colour. This is not an anti colouring comment, I like to colour my icings on cakes! – but it didn’t need it here for me. 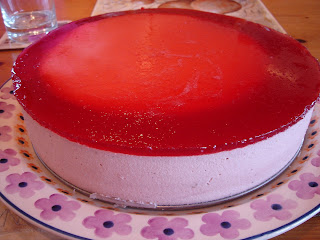 The cake is assembled by placing an 8 inch round cake in a 10 inch tin, brushing over some of the kirsch soaking liquid, pouring over some bavarian cream, then the same again – cake, soaking liquid and cream. This it then set in the fridge to rest for a few hours. 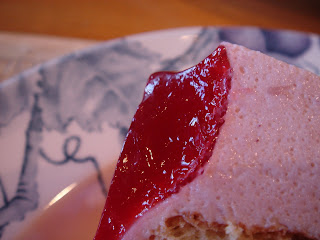 See the wobbly mirror and the lush Bavarian Cream...
Meanwhile there is more to be done. A strawberry juice is made by chopping 18 oz of strawberries and cooking them (bashed up a bit first with a potato masher) with some sugar and water, just slowly for 10 minutes. After that the juice is strained through a sieve and the berries discarded. The juice was a magnificent scarlet colour, and there was no red food colouring needed here either, as the colour was so ruby red anyway. There was some other flavourings added in the form of lemon juice, kirsch and also a little water, then set with gelatine. I varied the method a bit here because the gelatin was to be melted into the strawberry juice, but I melted it into the lemon, kirsch and water so the mirror layer cooled down much more quickly. The set bavarian and cake came out of the fridge and the mirror was poured over, it was supposed to be a film, but it tasted so good I added as much as I could get in the tin! Also, because my cakes were a little larger than they should have been I had a lower lip of cream round the cakes (this is easier to see in the pictures than to describe), so I hoped the mirror would cover my over generosity! It was quite tricky to carry to the fridge and next time I'd do the pouring of the juice much closer to the fridge. Luckily dear Hubby is quite tall, so he took pity on me and manouevered it onto the top shelf of the fridge - without any spillage at all! 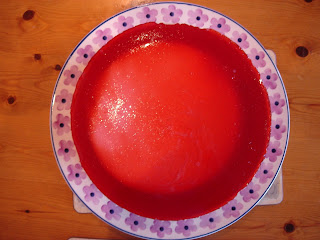 There is a slight ruffle on the top edge, little fingers were very keen to get a taste!
It was a pretty cake, and it tasted good together, the cake, strawberry cream and mirror juice. The juice was absolutely bursting with strawberry flavour. This cake was a hit with my family, and for a special Summer time pudding I would certainly make this one again.
If you fancy trying it here is the link for the recipe, on the lovely Peabody’s site. Thanks also to Peabody for choosing such a lovely cake this month! To see other Daring Bakers cakes visit the http://daringbakersblogroll.blogspot.com/ Blog Roll site and click away!
Posted by Kelly-Jane at 07:26

Glad you liked the cake. You did a wonderful job.

Great post! I bet the little fingers were wanting a piece of the cake so much!

That's a beatiful cake you made there. I didn't colour mine either. I really liked the dusky pink hue.

Your Bavarian Cream is lovely, so smooth! Nicely done!

A beautiful cake. Kelly Jane you did an excellent job of this!

Kelly-Jane that cake is absolutely beautiful!! Well done! And is that an Emma Bridgewater plate that it's displayed on? Perfection!

Another great challenge under our belts!
Kelly-Jane,
Beautiful job on the mirror. I had problems with that jelly roll size as well. Couldn't get two 8 inch rings out of mine ended up baking two cakes to get the two circles and then make little ones with the leftovers!

Hi Kelly-Jane, I love the platter you set the cake on. It definitely shown off the already beautiful cake you had made. Ha ha...them little fingers just makes the cake more personalized. I was miserly with the food coloring for the bavarian since I don't like them either, but with the mirror I had an oops moment :)

Hi KJ! Excellent job on the cake - glad to hear you enjoyed it! I too went without colouring my cake, and I think the cakes still look gorgeous!

The lip makes it kissable!

Lush is the word, it's great that it tasted as good as it looked!

Great job on the cake! There was a bursting of strawberry flavour wasn't there.

Beautiful job! It looks like it would be delicious, too. I want to lick up a big fingerful of that strawberry cream!

Looks lovely. Your mirror top looks almost like it's glowing!

I wish I would have baked my cake in two rounds like you did - there was not enough of the cake in mine for my tastes!!

Yours looks just like mine. I'm not sure if that's a god thing or not ;-)

Yay! It's beautiful, Kelly-Jane! I'll bet your little ones had a good time with this one. ;)

You did fantastic on this challenge. Beautiful cake.

Wonderful job with the cake! You got such a lovely color!

Lush is a great way to describe the bavarian cream. Very nicely done!

Who could blame the little fingers for wanting a taste? I would have too! So glossy and oink and lovely.

Beautiful mirror! I'm way too much of a bake-o-phobe to ever try this.

Your cake is lovely! How I admire you daring bakers...coming up with these gorgeous desserts! :)

Wonderful job! I love the plate! :)

Beautiful job! I did not color mine either because B. is allergic. I love the pictures!

Lovely cake, Kelly-Jane! What a pity strawberries are out of season here already :( I'd make this for my hubby. Perhaps I could use frozen berries, though?

KJ, you are an absolutely amazing baker - what a fabulous cake!
Well done!
xx

Your mirror is perfect, Kelly-Jane!

What a beautiful cake, Kelly-Jane. The lovely flowery plate you put it on is all the decoration it needs.

Gorgeous cake Kelly-Jane. It's the perfect pink; it looks beautiful on your plate.

Thanks for all the hints. I'm glad to hear that the cakes tasted good, after all that work you've put in. I also love the cake plate with the little flowers.

My first time on your blog! The cake looks so delicious!

I love the picture from above, where it looks like a framed red mirror. :)

This looks fabulous Kelly-Jane, hugely impressive. It looks like a fabulous party dessert.

Thank you for your lovely comments :)

It is an Emma Bridgewater plate! There is very little it doesn't enhance - it's one of my favourites. The middle has hearts on it and more flowers. When I get round to doing my Memes I'll post a pic of it with nothing on it.