This is the next batch of the Project, from Nigella Express by Nigella Lawson. 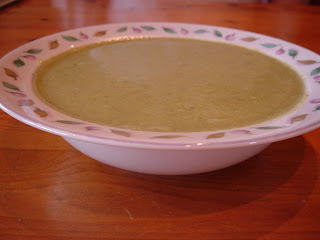 7. Broccoli & Stilton Soup
I made this one for Hubby as he absolutely loves soup, and he is pretty keen on blue cheese as well. This fast soup used 1kg of frozen broccoli, and is basically a simmered soup but with Stilton (blue cheese) added in while simmering, as opposed to at the end. Nigella also added in dried thyme. It blended into a smooth soup and made a vat of it. It was a bit strong for me, and I wasn’t convinced about the thyme, but I didn’t make it for me (just felt I should give it a go!) and Hubby liked it a lot, strong and gutsy and the blue cheese taste was strong. 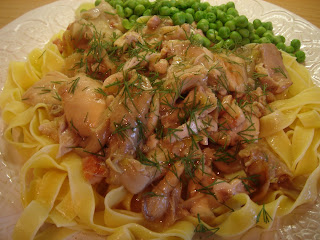 8. Coq Au Riesling
I sort of de-expressed this one a bit, because I can’t get boneless skinless chicken thighs where I live, so had to do a bit of DIY boning and skinning. I’ve done it before, and although I hadn’t forgotten how to do it, it did take me a little while to do. I had about 14 thighs, and the first 6 took me about 20 minutes, but the other 8 took only about 5 minutes – once I established a routine for doing them it became quite fast.
The chicken is simmered in a whole bottle of Riesling along with bacon, mushrooms, leek, garlic oil and bay leaves. At the end of the recipe Nigella says this is best the day after it’s made, so I planned for this and made the stew one night ready for reheating the next night. I liked this a lot, and didn’t add cream in this time, but I will try it next time just to see what it’s like. I served it with buttered noodles, and the sprinkling of dill in the recipe, and the dill went really well. I don’t think I’ve ever made anything with dill and chicken together (lots of dill and fish though!), and it worked well with the wine-y chicken and mushrooms. I re-heated the stew and cooked the noodles after a day out and it provided a lovely comforting supper, for what was a cold Autumn evening. Will do this one again for sure. 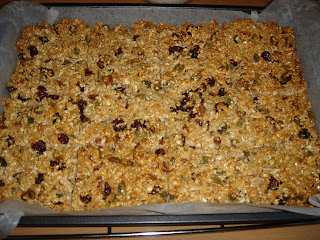 9. Breakfast Bars
These are a quick measure and stir then bake job. They make a sort of dry flapjack, or granola in bar form. I replaced the peanuts in the recipe with chopped pecans, there was also coconut, dried cranberries, pumpkin seeds and sunflower seeds – the liquid part being a tin of condensed milk. Nigella said in the book that these get better and better as they sit, and it’s true, they seem to have matured over a couple of days into a deeper taste than on the day they were made. They are really fruity, oaty, nutty and filling, my kind of breakfast on the run, mmm. 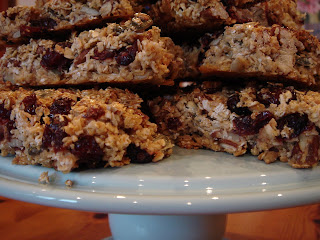 Those breakfast bars look great...perfect for on the go.

Oh Kelly-Jane. I know I said it was a good idea but you know I'm on a cookbook diet and now I've just found myself hopping over to Amazon... I'm resisting though!!

I didn't know what to expect when I had heard about these breakfast bars! They look REALLY good. Are there any suggestions given by Nigella for other ingredients to use, esp. the condensed milk?!

They all look wonderful!!

You are making me drool here!

Wow, good luck on your Nigella project. You'll be done in no time!

Well done on all of it!

Wow, what a project! And I can only second peabody: your breakfast bars look fantastic.

Those breakfast bars sound perfect for a quick breakfast, Kelly-Jane, and a whole bottle of Riesling with the chicken sounds excellent as well. :-) I love broccoli Cheddar soup, but have never had it with blue cheese, so I'm very intrigued...wonderful ideas, as always!

Popped back to see you to have a peek at more Nigella Express recipe results. Pleased they all turned out well!

i'll skip the broccoli soup :p and head straight for the granola bars...yumm !

I'd like to grab one of those breakfast bars right now w/ my morning coffee. A thousand times better than anything you can get pre-packaged, and hardly more time than ripping open a wrapper. Great post, Kelly-Jane. The express idea is a wonderful way to feature multiple recipes w/o too much wear on you.

Peabody, I've still got a couple left, and they are still great.

Anna, it's not cheap, but such a comforting supper :)

Amanda, Amazon is a bit dangerous at the best of times haha!

Brilynn, I've tried a few of this type of semi - healthy bars, and they are not all winners, some are just so heavy!

Ilana, no there is no substitution in the UK edition, hopefully you'll get one in the US one. I'm not sure what to suggest here, sorry.

Deborah and Cynthia, thank you :)

Hello Nan, thank you for your good wishes, and thanks for visiting :)

Belinda, I've tried chicken in Reisling before and bought a cheap bottle, but it didn't deliver. So having learned my lesson I bought a better one this time and it was much better :)

Margaret, these were all good, there is bound to be a few that we don't like out of so many, but so far so good :)

Susan, That is so true bought bars are often such a let down, just ok or worse! It should work out well blogging a few dishes at a time :)

The soup isn't for me but that coq au riesling and breakfast bars sounds delicious!

pEL0jj Your blog is great. Articles is interesting!

actually, that's brilliant. Thank you. I'm going to pass that on to a couple of people.

Hello people want to express my satisfaction with this blog very creative and I really like the views of the focus very good indeed Thank you for the helpful information. I hope you keep up the good work on making your blog a success!

hey buddy,this is one of the best posts that I�ve ever seen; you may include some more ideas in the same theme. I�m still waiting for some interesting thoughts from your side in your next post.

Wow, nice post,there are many person searching about that now they will find enough resources by your post.Thank you for sharing to us.Please one more post about that..