Another lot from Nigella Express by Nigella Lawson! I’m enjoying cooking from this book, it fits in so well with daily life, and of course I’m getting the joy of trying some new Nigella recipes. Any good suggestions for different ways to say the title of this post will be used soon! 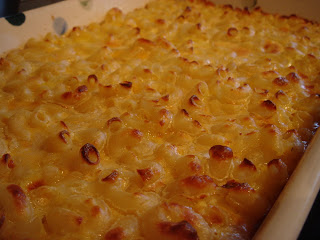 13. Macaroni Cheese
This is a quick take on the original, the sauce is cheese, evaporated milk egg and seasonings blitzed in a food processor, then mixed with newly cooked macaroni and given a short spell in the oven. It tasted good, it didn’t knock my own version off it’s perch, but as the quick fix it is, it’s still worth making. 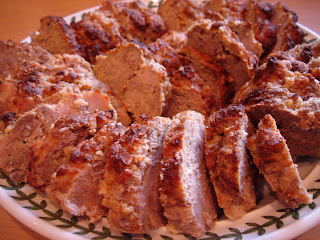 14. Mini Meatloaves
This we loved! Mince, sausage meat, A1 sauce (I used HP), oats, and seasonings. Formed into little loaves and baked. Nigella says they are not pretty, and they aren’t but the taste more than makes up for this! They are supposed to be served cold, but I would have to say I really liked them out of the oven too! I sliced mine up for the next nights tea, we were lucky there was enough left! 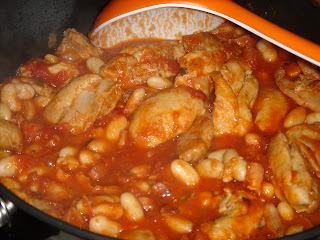 15. Chicken alla Cacciatora
This was a very speedy recipe, notwithstanding having to skin and bone the chicken thighs! Even so, I did this bit the night before, so when tea time came it was a quick job. This a dertainly better first day in my opinion, the gutsy-ness of the rosemary and bacon instead of developing, were lost second day. Keith suggested that some olives and capers would be good additions, and he is right… next time! I served this with rice. This one was on TV, so it’s been published on the BBC site already, so tah dah – a recipe!


1 tbsp garlic oil
75g/2½oz pancetta cubes
6 spring onions, finely sliced
1 tsp finely chopped fresh rosemary
500g/1lb boneless chicken thighs, cut into bite-sized pieces
½ tsp celery salt
125ml/4½fl oz white wine
1 x 400g/14oz can chopped tomatoes
2 bay leaves
½ tsp sugar
1 x 400g/14oz can cannellini beans, rinsed and drained (optional)
1. Heat the garlic oil in a pan and fry the pancetta, spring onions and chopped rosemary for 2-3 minutes.2. Add the chicken pieces, sprinkle in the celery salt and stir well.3. Pour in the wine and bring to a simmer, then add the tomatoes, bay leaves and sugar. Cover with a lid and leave to simmer for 20 minutes.4. Add the drained cannellini beans, if using, and simmer until the beans are warmed through and the chicken is completely cooked through.5. To serve, divide among four serving dishes. 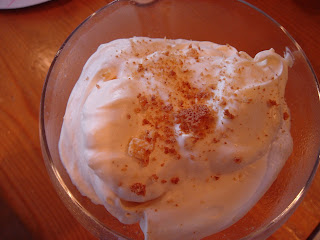 16. Amaretto Syllabub
If anyone has made the Turkish Syllabub from Nigella Bites, you’ll see where this recipe has evolved from. We love a creamy pudding, and I have made the Turkish one often, with many a liqueur, mainly fruit ones. This one has Amaretto in it, and I couldn’t help thinking: why didn’t I try that one? It’s gorgeous, and a sprinkling of amaretti biscuits both on the bottom of the glasses and on top before serving make it trifle-esque. Our little one (who I had made a different pudding for) was very keen on this! But I wasn’t so keen to give her it seeing as it has a reasonable amount of Amaretto in it! Nigella uses soft amaretti biscuits, but I could only get the hard ones so just gave then a good bash instead of a light crumble. My picture isn’t that inspiring, but it’s a delightful dessert.

80ml amaretto
25g caster sugar
1 x 15ml tablespoon lemon juice
10 fl oz Double Cream
Soft Amaretti Biscuits
Pour the amaretto into a bowl with the sugar and lemon juice, whick at mix.
Whisk in the double cream and whisk until thickened but still soft and billowy.
Crumble 2 amaretti biscuits each into the base of 4 glasses.
Divide the syllabub between the glasses and crumble another biscuit on top of each.
Posted by Kelly-Jane at 09:28

Just been and bought the book and I have been lurking and reading your updates with interest! Thought I would come out of the cold! Can't wait to get started with some of the recipes...

wow, KJ, you are on a roll....I really must try the meatloaves
xx

Thanks a lot! I'm obviously going to be breaking my self imposed cookbook diet. Can't see me waiting until Christmas now... Actually K-J anybody reading your posts since Operation Nigella Express began would be hardpressed to not want this book. You're doing a splendid job. Nigella and her team should be over the moon with you! Don't think I've ever had meatloaf but want some of those please.

Well you certianly have made me want to buy this book.

Glad you're continuing to have fun with this cookbook -- I'm enjoying your posts (but still haven't bought my own copy of the book!).

Looooove the mac and cheese shot.

The meatloaves and the macaroni cheese are on my list of recipes to try. I was planning the mirin salmon for tonight but now I'm getting tempted by meatloaves! You've made so much already, you'll be through the book in no time...

You have well and truly been 'Nigellad'. I'm really enjoying your postings!

I love syllabub. There is a colonial-era (American) syllabub that I love.

But of course your pic of the sillabub is inspiring! You made me wnat to try it actually, what could I use instead of the amaretto biscuits, please? Don´t think I´ll find it here :(

I've made mac and cheese twice in the last 4 days. Cravings just happen.
The mac & cheese and meat loaves would be my favorites here.
Fantastic that you are doing such an extensive wondering through this book!

These all look good. I'm looking forward to this series more than ever.

Goodness, Kelly-Jane...this cookbook has some wonderful recipes...so far, everything you are sharing on the blog looks irresistible...Nigella should put you on the payroll, because you are making a very good sales marketing director for her book! :-)

Looks like you've been eating well. Such delicious meals! I am so getting my hands on this book.

I agree with Kevin (re: additions to the chicken recipe). I usually also add a few anchovies. It adds more depth.

Hello Rose Vintage, Thanks for coming out and posting :)

Anna, They were lovely!

Gemma, I have the Mirin salmon marked as well, it looks great.

Eva, Some sort of almond biscuit could be substituted for the Amaretti, soft or hard.

Tanna, We are the same, sometimes only macaronni cheese will do :)

Belinda, Thank you :) Not on any payroll though! :)

Nora, anchovies are a great idea as well :)

Nice to see that so many daring bakers did both the cinnamon buns and the sticky buns! Nice job!!

KJ, I love reading about the recipes you have tried so far! And the adjustments :for ex. I was wondering what to find to sub the A1, HP, of course, genius! Thank you, I would love to make these some time.