Strawberries and Cream with A Difference 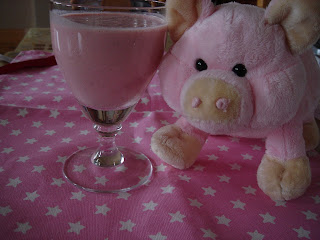 This is the pink piggy! (I've not lost the plot, honest)

This one comes from Jo Pratt’s In The Mood For Food, which I had a phase of cooking from earlier in the year. I haven’t forgotten about it and will be returning to it again! Anyhow when I saw Meeta’s Monthly Mingle this time I knew what I’d make. The theme is for drinks of all kinds, and this is a sort of smoothie, made in the blender. It’s a very simple blend and I would like to think it healthy even though there is a little bit of single cream in it. 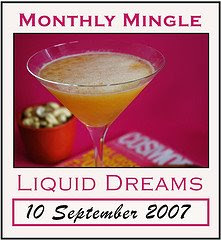 It’s called pink piggy smoothie in our house, because it’s the same colour as my little one’s cute cuddly toy who she aptly named ‘Pink Piggy’! Missy seemed to think her piggy should be in the picture too, and who am I to argue =) It’s an excellent way to get fruit into little tummies, and even better I’ve been asked to make a purple smoothie to match another toy, so I guess it’ll be blueberry smoothie next time!
I used activia yoghurt, as it’s what I keep in the fridge, I needed just short of 2 small pots. I’ve made this a few times and the easiest way, and the way of least washing up is to put the blender goblet on your scales and weigh everything in before blending.
What I must say though is it’s a gorgeous smoothie, and it’s good as is or even as a liquid pudding. 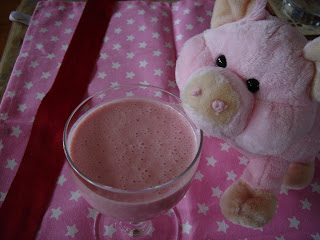 My little one thought the red ribbon would be perfect for the picture, I think my blogging is having its effect on her!
Strawberries and Cream with A Difference
From In The Mood For Food by Jo Pratt. I’ve fiddled a little and added in some fructose to sweeten it up a little without losing it’s healthy feel, also I omitted the splash of strawberry liqueur in Jo’s original.
200g ripe strawberries, hulled
150ml strawberry yoghurt
100ml single cream
1 heaped tablespoon fructose
Blend everything together!
Posted by Kelly-Jane at 01:29

Labels: In the Mood For Food

Love the piggy! :-) I think this drink will go down very well in my house.

Such a cute pig!! I love how pink it is. Great contribution!

Ohhhh That sounds delicious!!!!!Love the little piggy too!!!

Sounds yummy and healthy! Love the piggy too.

Pink, piggy smoothie - I love the name and I do love smoothies.

I love the pig...and the drink looks good too :)

Count me in to the piggy-fanclub too, please! Cute pink shade on both piggy and smoothie :)

Sounds absolutely delicious. What a lovely creation and such a cute photo!

Yummm! That looks so delicious. I'll join the piggy for a sip.

Love the pink piggy but the drink is the hit! Love it!

Thank you everyone, I glad you all liked pink piggy! and it's a super smoothie too =)