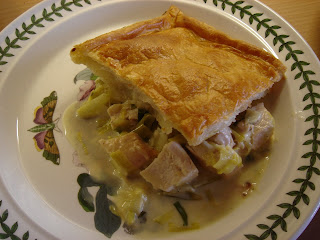 Chicken and Leek Pie
When I received Sophie Conran’s Pies last year this was the first pie I cooked. It has appeared at our table at least once a month since! It is definitely one of our favourite pies. I don’t know if it’s the chicken in its creamy wine sauce, the leeks or the subtle blend of rosemary and tarragon. Maybe it’s just the whole lot with the puff pastry. Whatever it is, it’s a lovely pie.
One of the reasons I was drawn to this book was its pink colour! But it has proved itself as a worthy member of my cookbook collection. I’ve only cooked four pies from this book so far, and that is probably because I keep coming back to this one. The other three are Spanish Chicken Pie, Creamy Chicken with Chanterelle Mushrooms and Classic Fish Pie. They have all been fabulous. I’m hoping soon to try a beef one – Beef with Button Mushrooms & Red Wine and another fish one too – Salmon and Fennel and (you guessed it) another chicken one – Devilled Chicken Pie. The pies aren’t all classic either, there are modern twists too like Pork and Stilton with Polenta Pastry or Chicken with Asparagus and Coconut Milk. A bargain at £12.99, although you can pick it up mostly for under ten pounds, I would certainly have paid more.
As an aside, Sophie also has a range of serving pieces (made by Portmerion), I only have three pieces, but I think they are beautiful. One of them is the round casserole on the front of the Pie book, which I am very attached to. My only disappointment is that there doesn’t seem to be a pie dish for 4 - 6, only individual pie dishes, and although they are cute, I would like a bigger one. Here is the recipe for the pie. 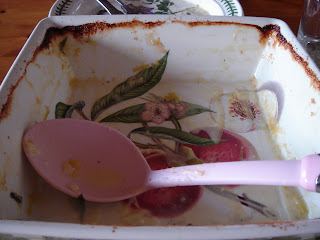 Chicken and Leek Pie
8 chicken thighs (I use 4 chicken breasts and roast for less time)
1 tablespoon olive oil
½ teaspoon dried rosemary, crumbled
salt and pepper
a knob of butter
3 leeks, chopped
1 tablespoon plain flour
150ml (5fl oz) whiite wine
150ml (5fl oz) chicken stock
150ml (5fl oz) double cream
1 large handful of tarragon leaves, chopped (I used a small one)
375g puff pastry
1 egg, beaten
Preheat the oven to 220oC (425oF/ Gas 7). Put the chicken in a roasting dish drizzel over the olive oil, rosemary, salt and pepper. Roast for 30 minutes. Remove from oven and allow to cool.
Meanwhile melt the butter in a large pot , add the leeks and fry gently for a few minutes. Sprinkle oven the flour and stir for a minute, Add in the wine and stock, simmer for 15 minutes. Stir in the cream and simmer another 5 minutes. Cut the chicken into bite size pieces, discard all skin and bones. Stir chicken into sauce along with the tarragon. Place in a pie dish. Cover with the rolled out puff pastry and brush with beaten eggs. Bake in the oven for 20 minutes.
Posted by Kelly-Jane at 08:01

I got this book for half price a few weeks ago and haven't made anything yet but definitely have my eye on the beef pie with yorkshire pudding crust - drool!

Your pie looks delicious and now I come to think of it, I haven't eaten a meat pie of any kind for a very long time. The Spanish don't seem to make them, and nor do I for that matter, as they are a bit too hearty except for the coldest of days here.

I've got some puff pastry in the freezer, now you've got me thinking what I could make with it, lol.

I own this book - bought it after seeing your Spanish chicken! I think you posted a pic on N.com. I haven't made anything yet either! I don't know why. I guess because I never make pies. This one looks delicious like the Spanish one. Maybe I should start pie-making!

What I love about you is that you really are cooking the books! You try something from just about all your books, and that's really an inspiration to me. Mmmm, dinnertime at KJ's house must be absolutely lovely.

Chicken Pie, delicious! I also love the idea of polenta pastry, you should give it a go and tell us all about it so we can copy you if it works!

Kelly-Jane - I love pies, and this one of chicken, leek and tarragon is enough to make my mouth water. Puff pastry is a dream when one wants to make a pie, but the polenta pastry is intriguing, too.

I love that you're so experimental and really trying to use your cookery books. This is a great blog.

Well I wouldn't say I use all my cook books, but manage a good variety here and there :)

Shaun, nice to see you here, thanks for your comments :)

I am going to try the polenta pastry at some point, but it may take me some time to get there!!

I too love this pie from Sophie's book. It is a regular favourite of ours!